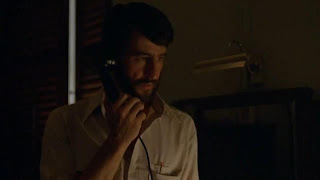 The Killing Fields is a very strong film that depicts its story with almost as much effectiveness as possible. My only real problem with the film is the synthesizer based soundtrack can be slightly distracting at times.

Sam Waterston plays a role here that never gets that into the depth of Schanberg but that is not the actual point of the film, and it never really diminishes his performance. Sam Watertson really does something incredibly key in this performance and that is merely plays as realistically as possible. Schanberg goes through many things in this film from fighting for the truth of the story of the U.S. in Cambodia, to surviving close brushes with both sides of the Cambodian forces, and to dealing with leaving his Cambodian friend Dith Pran (Haing S. Ngor) behind. Schanberg throughout the film is always just on the mark.

Waterston can always be followed throughout this film, as just a real person in the events. This is not a performance of mannerisms or of any sort of showy acting. He always just keeps to the real facts of the character and never does anything wrong. He does slight accent that is fine but he never does anything distracting or to drawn any extra attention to himself. Since the film's intent is realism Waterston is always right to be part of that realism rather than trying to separate himself through overacting. He is always fully believable as Schanberg as does always seems to be a real man in these situations rather than an actor playing a character.

Now his performance might seem that it could be underwhelming but it is not. He handles every scene he has with the same conviction in his performance. A conviction that is necessary to the film. he has his scenes of yelling at the various officials but Waterston always puts the right amount of realistic passion into all of these scenes. He also takes the same approach in showing the strong friendship between Schanberg and Dith Pran. Neither actor forces the friendship between them, rather making it a quiet friendship that is all the more effective in the end. They show their friendship without saying it, always giving the right respect and admiration for each other without ever losing the all important realism of the film. Waterston never has any big acting scenes but with this performance he does not need them. He always remains a strong presence who can always be identified with throughout the film.

I think he'll come in third, but great writeup!

Sage: Glad to hear we agree on another rating.

Joe: Thanks and possibly.

Fritz: It is a very strong film its too bad that the film as not as well remembered and known as it should be.