Peter O'Toole received his fifth nomination of eight for playing Jack Gurney the 14th Earl of Gurney in the Ruling class. The ruling class is a less than subtle satire of the English upper class. The overall tone of the film is all over the place and the only part of it that really works is the acting.

O'Toole first arrives in the film as a paranoid schizophrenic with delusions of Grandeur. He specifically thinks that he is God so much that he spends much of his time pretending to be crucified on a cross. O'Toole performance here is obviously not one the most subtle ones he is ever given. O'Toole usually plays characters who at least seem slightly insane but here it is full blown and all the time.

The second part where he no longer believes himself to be God is the best part of the performance. This is where he begins to believe he is Jack the Ripper. O'Toole here creates a delicate and in depth portrait of a man who has turned into a man of great darkness. His scenes where he speaks of how he once was are brilliant, as are when he makes his violent speech at the end. His transformation is brilliant and his two sides of the character are really the only interesting thing in the film, even if they are all part of the overly forced satire that the film is. For this O'Toole gets

Posted by Louis Morgan at 16:51 No comments:

Paul Winfield received his only Oscar Nomination for playing Nathan Lee Morgan the patriarch of the struggling black family in Sounder.

Sounder tells the story of the family but mostly of the son played by Ken Hooks who should have been nominated instead of Winfield. Winfield has his first scene where he is hunting with his son where he does a fine job showing the man's frustrations and his love for his family. Then he goes to Jail. He has one scene where his son visits him which he again his fine but not anything overly special. After a long while he returns home and has one more scene with his son. This scene he is good but again not anything amazing. Winfield must be one of the shortest nominees and he does a fine job with what he has but not a great job. This performance there is not that much to write about because of its shortness. I was a little surprised how little he was in the film and maybe if he had more time he would have gotten higher than

Michael Caine received his second nomination of six for playing Milo Tindle an Italian/English hairdresser who is having an affair with a strange mystery writer's wife.

Sleuth follows the story of the hairdresser and the writer who play a series of very odd games with one another. 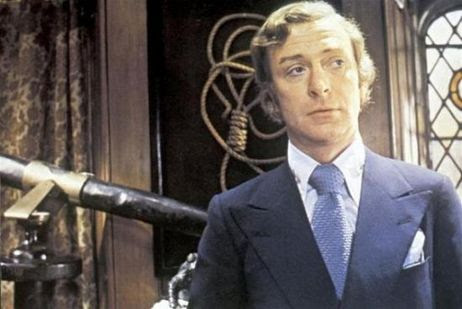 Here I will mention that my review will have spoilers since I do not think I could completely review this performance without talking about the twists in the film. Caine in Sleuth goes up against Laurence Olivier and their work together is positively compelling. They really do not try to up show each other but rather they work together on the scenes to make them work.

Caine starts out as Tindle without knowing what he is getting into.  You get to know him well as he tells of how his father failed as a watch maker, and how Tindle stands as a man because of the way he just talks about by his own biography.Tindle next becomes part of an elaborate plot to steal the writer's jewels so they can both make a profit. Both of the men have incredibly fun in this scene where Caine dresses like a clown. I felt they allowed the audience to have in on the fun  because I did not think Caine over did his own joy but handled it just right to let the audience in.

The joy ends when the writer Wyke pulls a gun on Tindle with the intention to murder. This is where Caine gets completely emotionally vulnerable. I really felt for his character and Caine sold the pain as real as possible.

Caine then comes out with his dual role of sorts as one Inspector Doppler. I myself suspected the inspector as a fake instantly but that was not Caine's fault, because I knew there were only two actors in the film. He gives us a nice character as Doppler and I found the inspector interesting and amusing and it just added to Caine's overall performance. After the Doppler charade though Caine makes a big change in character to a self proclaimed murderer. Here Caine takes over and his performance is just brilliant his coldness is just perfect and his mocking of Wyke could not have been done better. A performance that I felt only got better with another viewing. Caine gets

And The Nominees were:
Michael Caine in Sleuth

Peter O'Toole in The Ruling Class

Marlon Brando in The Godfather

Paul Winfield in Sounder
Posted by Louis Morgan at 23:00 4 comments: