5. Jose Ferrer in Joan of Arc- Ferrer does basically nothing with his performance as the Dauphin, being an incredibly dull presence, while still being overly theatrical in his way of speaking. 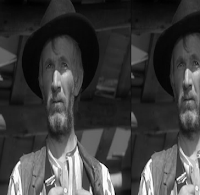 4. Oskar Homolka in I Remember Mama- Homolka overacts very heavily in his scenes being far too obvious in his performance. I did like his last scene where he toned it down but that was not enough.

3. Charles Bickford in Johnny Belinda- Bickford is good showing the transition of a father from believing his daughter to being dumb to truly loving her despite the fact the film and script are really built away from him.

2. Cecil Kellaway in The Luck of the Irish- Kellaway fulfills his role perfectly, he just seems right as a Leprechaun. Even though the part is not the most complicated Kellaway still gives a very nice performance.

1. Walter Huston in The Treasure of Sierra Madre- Huston tops the list once again, making him the biggest winner for me with three wins so far. Huston is just terrific from beginning to end, adding so much to the film with his energetic presence. He is brilliant at creating Howard the old prospector with his voice and manner, and creating the depth of character showing so much more to the character than what is spoken aloud. (Good Prediction Dinasztie)

Thanks. I can do that after I do Supporting 61, and one other lead year I have been planning to do for awhile.

It always amazes me how fast you are! Have you seen all the movies already and made notes or do you all watch them for your reviews now?

Thanks. I usually watch them as I do the reviews, except if I have seen the film fairly recently before the reviews.

Cecil for me...simply because I thought he was entertaining.

Never understood the praise of Walter Huston or his movie.

Well I guess with this one we really disagree, but that is the way it is with films.

Well, first of all thanks. Second, good job. I have to see Kellaway and rewatch Huston.