Peter Falk received his second and final consecutive nomination for portraying Joy Boy in A Pocketful of Miracles. 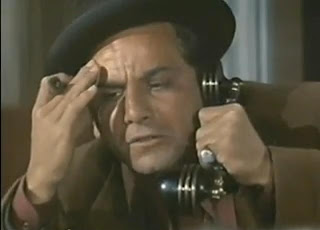 I like Frank Capra films but this one might be his worst. It is boring, schmaltzy and not really enjoyable at all.

Peter Falk apparently was the only thing that got Frank Capra through the filming of this movie, and it was the only thing that got me through watching the movie. Peter Falk plays Joy Boy who is the right hand man to Dave the Dude (Glen Ford). Joy Boy is the guy who tries to do what Dave needs him to do, and plainly get the job done. Falk role here is pretty limited acting frustrated at what he has to do and what the other people are doing in the film. Perhaps he was there symbolize the audience's reaction to the film. I must say Falk does what he does in this film well almost acting in another movie, as a man who sees all the schmaltz and sort of makes fun of it.

His rough delivery works very well, and shows how lame the rest of the film is really. I liked his performance and his constant reactions which reflected my reactions to the film. Unfortunately the film was not about him at all and especially in the second half where his reactions are very much in the background. When you do see him his performance remains the bright spots in the film, but unfortunately the boring main characters are given more importance. If Joy Boy was given his own film perhaps that could have been something because I do like Falk here, but Falk here is limited by the film, making it so his performance can't quite be separated from the mess it is in.

I echo your thoughts on the movie...and Falk too.

Haven't seen this one. He will be fourth hopefully.