Richard Dreyfuss won an Oscar from his first nomination for portraying Elliot Garfield in The Goodbye Girl. 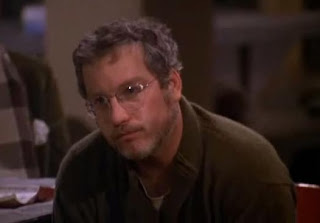 The Goodbye Girl is a fine but fairly standard romantic comedy. It has some nice moments, but it also has some very annoying ones too.

Dreyfuss must have one of the most obnoxious introductions for a character ever. I find when he first shows up bothering Paula (Marsha Mason) I was just as annoyed as she was. I really cannot stand his performance at all when he first shows up, for me it is like fingernails on a chalk board. I suppose he is suppose to be annoying in a funny way here, but I just felt he was annoying in an annoying way. Everything he did just bugged the heck out of me that really made it hard for to watch these early scenes, his performance just was that caustic. Now an actor can be a little annoying but he simply went too far for me.

Now Dreyfuss' is initial obnoxiousness does not entirely go away for me but it severely tones down after these first scenes. After this very rough beginning though I really thought he did improve greatly. His manner kept slightly similar but as the film wore on he founds other aspects of Elliot that were not only not annoying but actually charming in some ways. After his initial overload of obnoxiousness I eventually could find a character inside of all that could actually be liked. I actually found myself caring about his story and his troubles as an actor. I honestly felt sorry for his troubles because Dreyfuss did eventually make him sympathetic. I thought he was particularly effective with his face which really conveyed a lot after his troublesome first performance. Also he really is honestly charming with Marsha Mason.  He gives a very honest and earnest portrayal which I felt had the just the right amount of heart.

Richard Dreyfuss here is a performance I would say I certainly did not think very highly of the first time I watched it placing him as the second worst winner. Now the first time I watched the performance was for the ranking, and perhaps I expected him to be bad. Well I felt he did fit my expectations so well for the first part of the film that it perhaps clouded my judgment a bit for the rest of the film. Since now that I have watched it again, he is not nearly as bad as I originally thought, although that certainly does not make it a great performance it certainly is a descent one after all. In fact if he had not had his opening scenes I would say it might have been completely deserving with this very good romantic lead performance.

Interesting review. I even liked him when I watched the movie, because I tought that he had to be annoying.

I really like the movie and I was surprised how much I liked his performance.

Oh that's fantastic to hear! I thought she had much more control of her character then Dreyfuss.

I haven't seen the movie in five years or so, but I remember thinking he was fine.


I'm surprised that you liked him more.

Well as Sage says seasons change. And I am glad his performance worked better for me this times, since I always prefer liking a performance than hating one.