Best Actor 1950: Spencer Tracy in Father of the Bride

Spencer Tracy received his fourth Oscar nomination for portraying Stanley T. Banks, the titular father, in Father of the Bride. 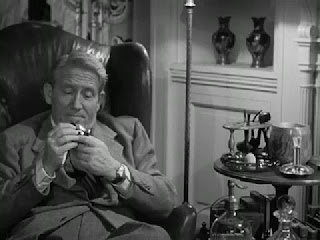 Father of the Bride is an okay comedy of sorts, that shows an example of the problems and responsibilities a father must face when his only daughter is getting married.

Spencer Tracy's performance in this film is the foundation of the film for his entire time. It begins coming in on him tired from his dealings with the marriage of his daughter and his narration carries us through the story as he had to deal with the various requirements of a father at this time. Tracy does just fine as a character to follow through this ordeal, with his nice demeanor and fairly to the point narration. Tracy is allowed to have some fun great fun with his performance, because the narration gives his real thoughts as Tracy has to put on a facade at times. Tracy goes for the right amount of humor in a very relaxed simply fashion through the differences in showing his true thoughts with his face and reactions combined with his narration.

Spencer Tracy besides these scenes get many scenes of going through the motions. This is not about his performance but about what the character has to do. He has to go through the motions of being the father of the bride such as meeting the fiancee, and the in laws, and dealing with the various minor problems with the wedding such as tending bar. Tracy does a fine job as the father and is always believable and charismatic enough to watch through these tasks. Tracy also always tries to add a little humor whenever he has a chance to. In all actuality the film could have been incredibly boring without Tracy, since all the other performance are fairly simple, and it really just focuses on the father. Tracy keeps his performance interesting enough which keeps the film interesting enough.

I think he'll be third, I'm glad you liked him, since you hardly ever like him.