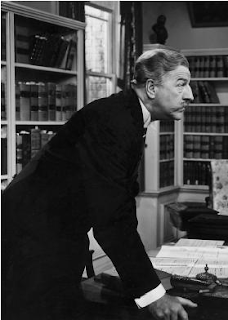 The Magnificent Yankee is a fine old fashioned biography picture, a fairly overwhelmingly positive portrait just as they all were and this film and others like it were enjoyable in a certain way because of this.

Louis Calhern was mostly a character actor, and this one probably his only chance for a leading Oscar nomination which he did recieve.Oliver Wendell Holmes as portrayed by Calhern and the film is a very upstanding judge, who always believes in what is right, and does not mind telling people what he believes. He dislikes some things like reporters, but is a nice man, and has a great relationship with his wife. There is not that much to Holmes besides this. He is not a character of much complexity which is fine since it works well enough for the film. Calhern does just a fine job as portraying Holmes exactly as he is written. No more, but no less either. His performance is not especially charismatic, nor is a boring or dull, which it could have been.

Holmes does hold his beliefs well even if they are against the grain.Calhern is just fine again in showing the passion for Homles' beliefs. It is not an outstanding passion and Calhern plays in a fairly low key fashion which seemed to be the right way to portray this. Holmes stays about the same throughout the film, the only real change is that he gets older, and older. Calhern is fine at showing Holmes' steadfast demeanor, but as he grows old Calhern does not show all that much change for most of the film leaving the aging mostly to the makeup department.

There is one change for the character and that is Holmes loses the company of his wife for his final years. Calhern is again just fine in showing his sadness at his lost. Also showing his happiness and strength he gains back when he meets all the men he has influenced throughout his years. Calhern simply is just fine throughout his performance, giving a performance one would expect from a competent character actor, no more no less. He is never bad and his performance suits the film well enough. He could have done more, as could of the film, but in the end both are really just fine.