James Stewart received his fourth Oscar nomination for portraying Elwood P. Dowd a man whose best friend is a Pooka in Harvey. 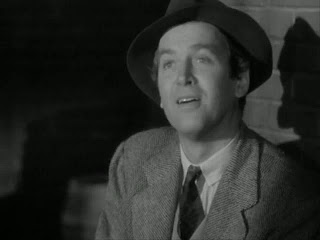 Harvey is a weird comedy I will say, it tries for something very odd, and I would say it does not succeed fully but I do not think still is an enjoyable film.

I must say that Jimmy Stewart certainly has quite a challenge with the character of Elwood. Elwood is most assuredly a bizarre man, whose level of sanity certainly is up to debate. Elwood as a character could have been rife with problems such as being too crazy or being creepy, or most importantly not being at all believable. Elwood certainly is a preposterous character and could have been all of these things. Also the film put the actor as Elwood in a very very odd spot, since is he crazy, I mean Harvey does clearly actually exist with the dictionary scene and all that but Elwood still is suppose to be an alcoholic, and he still oddly constantly wants to hand people his card.

Stewart then is in an incredibly tricky spot since the film makes Elwood so strange. Stewart though I think does manage to find a way through all these oddities in making an endearing character out of Elwood for me anyways. I think this comes partially from Stewart's demeanor he uses so well in this film. He has his usual Stewart charm in this film, but in an specially relaxed sort of way, which I think is the right tone for Elwood. After all this alone I find makes it so Elwood unique problems do not seem abrasive or creepy at all, because Stewart is such a relaxed presence. He plays Elwood as a nice guy who happens to simply be friends with a giant rabbit. I actually believes that he saw Harvey because of this attitude he has in the film. He just turns and talks to his friend Harvey like everyone else he speaks to which I felt worked for the oddity of Elwood.

Stewart's performance is one that Stewart finds the perfect tone for and keeps it throughout the film. It is the right way to play Elwood in my opinion and this allows I felt for the best moments of the film. I think everyone of Stewart's speeches he makes about meeting Harvey, or his speech about his philosophy of life are very well handled. I found he put the right heart into them, and made them as poignant which they very well could have fallen flat. He finds the right tone for this very difficult character, and I think he actually succeeds with the bizarre Elwood, which really is pretty amazing considering the nature of him. He somehow stayed realistic to me, for every moment, I did believe in Elwood as a character. I would say his performance could seem simple since Elwood does not change, but that is the point of Elwood. The hardest part of the portrayal was the original creation of the character by the actor, which was very difficult but I feel Stewart managed to pull it off.

Yeah, I just don't get this one either lol...