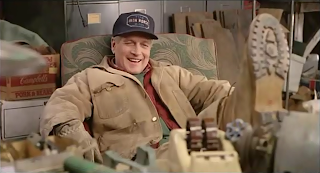 Nobody's Fool is not a particularly good film. A lot of the supporting acting is pretty bad, the direction seems off creating the wrong tone for the film, and the story is frankly not that good.

Newman portrays Sully who like his earlier performance in The Verdict is a man a downtrodden guy who has made a lot of mistakes in the past, but now has a chance to improve on his mistakes of old. The difference though is Nobody's Fool is a much lighter film, and his chance for redemption seems much less monumental. Sully is one of those lovable hard edged old guys who is a wise guy to everyone. His character frankly feels like a cliche to tell you the truth, although I do believe this does entirely come from the film and its predictable story and characters.

Newman although he really does manage to give a good performance despite the weakness of the film. He does give a very charismatic and likable performance. Although I do feel the whole character of Sully is quite forced in his colorful character fashion, but Newman does his best to make him a realistic character nonetheless. He never makes Sully entirely believable in every aspect of the film, buy he sure does try, and almost succeeds which is an achievement. I could see how almost everyone liked Sully because Newman is that incredibly likable with his performance here. I even sort of believed his romance with Melanie Griffith in the film. It was quite hard to believe in the way the film put the relationship together but Newman's charm does still sell it a bit.

The whole aspect of the past of the character as an irresponsible man who left his family, I did not actually entirely buy. Frankly because here Newman was actually too likable to really suggest this past. I will really blame the film that poorly positions this as part of his background, and frankly it never gives any current showing of this aspect of the character, nor does Newman suggest this in the past of Sully well enough either. I will admit Newman did excel in showing his attempt for redemption by trying to bond with his grandson and son once again. Newman actually makes Sully's attempt to reconcile rather nicely, sweetly even though the film and his poorly acted co-stars again leaves this mostly to Newman to make it at all poignant.

I did thoroughly enjoy Newman's entire performance in this film, it is lacking in a few aspects, which I do blame mostly because of the weakness of the film. Newman's performance though still is an interesting performance that is filled with honest feeling, as well as actual charisma. His performance is mostly just good though, and is helped back I feel by the film, which does not fully utilize his performance as well as it could have frankly. There are some incredible moments of great acting in his performance such as his slow honest emotional response to entering his childhood home, but overall it is a little bit of a missed opportunity that for me remains as just a good performance.

Hurm. Looks like Newman will not win this year.....

I agree - I tend to think the nomination came from him being Paul Newman, not so much the performance.

Well, as far as I'm concerned, just being Paul Newman is a hell of a lot better than a lot of other actors these days.

Sage: I would agree actually, since I am sure that is what probably pulled him ahead in the votes over Tim Robbins or Ralph Fiennes.

Dshultz: That is certainly true as well.

You have got to be kidding. This is a wonderful film. I'm a 'likable' guy with a past just like him. Just because it's not in your personal experience doesn't mean it's not plausable. You come off kind of like a snob. Read the dozens of reviews where the whole cast is praised, and people identify with the story.---The 'original' Sage