Best Actor 1994: Nigel Hawthorne in The Madness of King George

Nigel Hawthorne received his only Oscar nomination for portraying King George III in The Madness of King George. 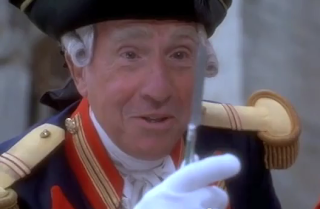 The Madness of King George is a somewhat interesting film that follows George through his later of his life as he deals with insanity.

King George III begins the film as a functioning Monarch but clearly one that is a little off. Hawthorne has the correct kingly demeanor for George. He commands a room therefore a scene well with a strong presence needed for the strong King George III. Hawthorne is good in that he quickly shows Hawthorne a likable, and interesting enough man to be able to wish to follow him through his life's journey.He shows George as a strong commanding who does not like disappointment, but is off. He does it early in smaller ways which could easily be seen as a Monarch eccentricity. It is not one and Hawthorne naturally portrays these small indications of his illness, such as saying what-what.

George's illness quickly grows leading to even more flamboyant action from the King, as he does go completely over board. Hawthorne deserves a whole lot of credit here for the insanity of the King could have been portrayed in an all wrong fashion. Hawthorne manages though firstly to make the insanity of the King actual insanity, that is more flamboyant than perhaps it would be in another person since George was already a flamboyant domineering personality to begin with. He manages to make all of the insane actions that George takes actually natural in an insane sort of way which is quite well done.

George to overcome his illness is treated to many very harsh treatments. Hawthorne has a difficult performance here as he must show his insanity, the pain he incurs from the treatment, and his struggle to attempt to maintains the dignity of the respect of a King. Hawthorne manages each, and presents his pain of the treatments especially well. His loss and struggle for his dignity, is made quite poignant by Hawthorne as he shows the sadness of this man as he is losing the command he has always had throughout the entirety of his life.

I think best part of his performance though is when he finally does recover mostly at the end of the film. His retaking of his life is an outstanding series of scenes on his part. His retaking of what was his as King. He is strong and completely commanding which is an interesting contrast to how vulnerable he was when he was completely insane. His seizure and control of everyone in the kingdom is brilliantly handled by Hawthorne through his renewed powerful presence. He keeps his hints of insanity though properly showing his lack of full recovery. Hawthorne gives a strong performance, and handles his challenging role with ease.

I haven't seen this one.

Me neither, and if I know this blog, Hanks isn't much of a factor, so it looks like it's gonna be between Freeman, Hawthorne and Travolta.