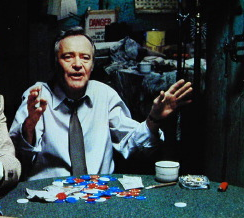 Tribute is an awful film about an estranged father and son finding each other again. It tries to be a character study, but it had nothing interesting to say. It tries to pull your heart strings, going at extreme manipulative lengths to do this, and fails. Also none of this is helped by a horrendous, and I mean horrendous performance by Robby Benson as Scottie's son Jud Templeton. The film was already hard to sit through, but Benson made it really unbearable.

Scottie Templeton is some character you know, oh he is one crazy character. He drinks, smokes, acts wacky, lusts after all sorts of women, constantly makes movie quotes, once was  a screen writer, now he is a Broadway press agent, has an estranged son with his divorced wife, oh and did I mention he is dying. Oh no, not Scottie. Now if you have not noticed I am being a little sarcastic, because I frankly could not stand this over written, obnoxious, Oscar baiting of the worst type, character.

But energy used for what, for nothing in my book. He uses it for an overly obnoxious performance, that gets old after about the first scene. Lemmon goes throughout the performance to get either an emotion, or a laugh out of the audience which becomes very, very tiresome. I'll give him a little credit for trying, heck he even dons a chicken suit to get something out of the audience, but I will not give him credit for succeeding because he doesn't, it is obnoxious obvious ACTING acting of the worst type.

Lemmon's performance is just a comic routine that goes nowhere, and certainly does not create any laughs, but it becomes from time to time dramatic, usually in him showing his sudden burst of grief, which again feels like him saying look I laugh, I cry, give me an award. I'll grant that Lemmon does not get any help in creating any effective or emotional scene since Robby Benson is so bad, and their father son relationship is suppose to be key to the film. Lemmon though even if he had a better actor playing his son, it would not stop Lemmon's overly flamboyant performance from becoming tiresome. Overall this is one of Lemmon's weakest efforts, certainly his weakest Oscar nomination. Lemmon's unique mannerisms, and style can be effective, but not here, certainly not here.

Ouch. Sarcasm hurts. Good thing I never had much of a thing for Jack.

Wow, I definitely have to see this, I honestly haven't seen a weak performance by Jack Lemmon yet.

Well, although I really love his acting in general, I haven't seen this one. He had a natural tendency towards overacting, Billy Wilder said that every performance of Lemmon had a side of ham that had to be trimmed. There's truth in it.

I love this movie, and especially Jack Lemmon's performance. Very, very funny ... and reminded me of my dad. It was tough being the son of "the life of the party." And that's what this movie is about.