Maximilian Schell won an Oscar from his first nomination for portraying defense lawyer Hans Rolfe in Judgment At Nuremberg. 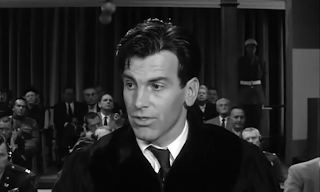 This seems a bit of a strange win in that Schell was only in a few films before his win here, and was hardly really a well known actor at the time. It seems even odder that he defeated his veteran actor co-star Spencer Tracy. Also his role of Hans Rolfe is a firmly supporting one, and not the actual lead which is Spencer Tracy. Now perhaps his win is not that odd though just look at the acting winners, the academy that year had no interest in rewarding veterans even long overdue ones like Montgomery Clift for this film in the Supporting Actor category for this same film, and they really just wanted to award newcomers, since all winners were first time nominees.

Another reason though that helped him win is although his role is supporting, it is a very showy performance with still a good amount of screen time. Hans Rolfe is a very passionate lawyer who fights to find the accused judge Ernest Janning (Burt Lancaster) innocent on the charges of crimes committed against humanity due his work for the Nazis. Rolfe basis his case that they were just acting within the law of their country, therefore did not do something technically wrong.

Rolfe to illustrate his points make many passionate speeches before the court. Schell excels in all these moments and does realize the want for German respect for Rolfe very well. His speeches are thrilling because Schell infuses them with great command and energy. Schell is very charismatic in his performance and does control the screen whenever he is speaking. It could be easy for the viewer to shrug off all of his points that make excuses for horrendous crimes of the Nazis, but Schell does avoid this because he just simply states Rolfe's views exceedingly well.

Now does that mean I was convinced by his points, no, but Schell performance allows for a thoughtful discussion because of his earnest portrayal as Rolfe. Now Rolfe has many scenes where he must show how someone was "justly" convicted because they did fit into guilt of Nazi laws. If these scenes he breaks apart the witnesses of the Nazis, or victims of them. Schell is exceptional again , in his cold demeanor, and it is realistic in his calculative method of finding what he wants. Now although Schell is terrific in these moments, I must say they are a bit of plot contrivance because frankly do not believe the Tribunal would let them go on, especially in the scene where Rolfe verbally attack the victim played by Judy Garland, badgering the witness anyone? I mention this though because if Schell was not nearly as strong they could have been terrible frankly, but I still will say even with Schell they are not entirely believable.

Schell performance has a lot of yelling, which I will say does fit for Rolfe, because he has to get his point across, but it is mostly an external performance. The viewer actually only finds out a little of who Hans Rolfe really is. Now much what is written about this character today calls him a Nazi lawyer. That could be correct by the way he treats Montgomery Clift's and Garland's characters but from the other little mentioned about him is that he just is young German lawyer who wants to savor a little respect for his people.

It is hard to say Schell is given few scenes that show the true nature of his character. He is given total three scenes outside the courtroom. Two he speaks to Lancaster's character and shows his respect for him, and claims he did not like doing what he had to do in the courtroom. Schell is given little dialogue, and I really find he more of suggests with this for the German respect side of this character's interpretation. I think one other scene actually in court further supports this side, and that is his face when he must react to the concentration camp footage. Schell does show quite well show that Rolfe really was very emotionally affected by the footage. I think does more of support him as just the young lawyer seeking for some respect. This should be mentioned because Schell is able to suggest this aspect of his character with little to no material.

You're absolutely right about everything: it's a showy supporting performance that manages to impress because Schell is constantly "ACTING" - but he does it very well.

For me,one of the greatest performances of all time.

This is not odd win at all.It is one of the best performances ever.

I think it is magnificently acted and the scene in which he (in my opinion correctly) challenges the supposed flaw of German character which made the Third Reich possible is one of the greatest moments in cinematic history.

He was amazing, I'm not sure about the category placement but he was far better than what I expected from reviews I had read before.

What did you think of Burt Lancaster in the film?

I'm with the majority here. Maximillian Schell was AMAZING as Hans Rolfe but he's really a supporting character. Yes I know you can have more than one main character sometimes (like Christopher Plummer and Julie Andrews in The Sound of Music) or an unfocused ensemble with no leads or supporting actors (like The Return of the King) but Judgment at Nuremburg is certainly not in those categories. I would have awarded Schell Best Supporting Actor in a heartbeat over George Chakiris in West Side Story.

Then perhaps you haven't watched the film. His performance was magnificent.