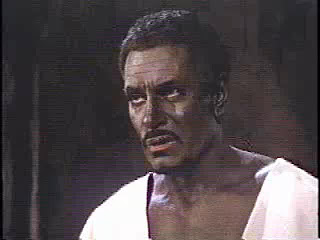 Othello is not really all that much of a Shakespearean film, but rather a filmed Shakespearean play. There is no music, and everything takes place on what are basically enlarged stage sets. It does not really utilize the art of film making itself, but it remains interesting because the play Othello itself is interesting. It is clearly not filmed with film really in mind though which makes it lesser than Olivier's own directorial efforts of Henry V and especially Richard III.

Olivier's portrayal of Othello is one rather controversial because Olivier wears heavy black makeup in the role. He is so black in the role that one light reflects off of him in the right way he does in fact look a little blue. I say black makeup not Black Face because Black Face was really the term for someone doing that in a minstrel show, Olivier's performance most certainly is not a minstrel show, and I do not think his performance was trying to be derogatory at all, and was simply his method of trying to find the character for himself.

As Shakespeare performances go this is not Olivier's greatest. I will say one reason I think is the nature of the Othello film. This film was not directed by Olivier himself, and that is certainly noticeable. Olivier clearly knew how to present his acting, on film. He always seemed to pick the right close up, and angle to view him. I feel this film much of the time merely just shows him rather working with his performance. Also another noticeable difference is Olivier is not focused on as well as in his own films, which again does not allow as strong of a performance from him alone, although that is what probably gave Joyce Redman, Maggie Smith, and Frank Finlay (who could be considered lead as well) better chances to be nominated.

Olivier's performance I will say is more theatrical than his previous efforts. I think one reason for this is because the film is really just a play being filmed, and Olivier seemed to play the part just as he would onstage, where in his own films he probably made more fine adjustments to his performance that more thoroughly utilized the abilities of film. He reacts in his scenes that are very theatrical in his movements, and reactions using the stage for his performance rather than film itself. Another reason though could be that Othello is an extremely theatrical character, with his jealousy, and his epileptic fits. Olivier due to these aspects of Othello is most certainly theatrical but that does not make his performance a weak one.

Olivier as I said in his other Shakespearean performances Olivier is a master of the Shakespearean language. He again makes it very natural sounding, and fairly understandable. Olivier does use a low voice rather than his natural tenor for Othello which I thought was effective enough without really seeming too forced. I mean I always knew Olivier was doing these mannerisms as an act, and his mannerisms he employs as Othello simply are not as effective as the ones when he portrayed Richard III. Also what he has to do as Othello is not nearly as interesting for a whole long while in the film. For about the first half of the film Othello is very stoic and mostly gives very stern orders, Olivier handles doing this well enough but the role is fairly simple at this point.

Othello becomes very challenging character though in the second half though when he is told by Iago (Finlay) that Othello's wife Desdemona (Maggie Smith) has been unfaithful.  Olivier must make Othello big jealous reactions along with his epileptic fit. Olivier I will say is a little mixed in this part, but remains interesting. He does seem too theatrical at times, but still remains effective as Othello nonetheless. It is a strange mix that does work I think despite the acting being somewhat obvious, it still remains effective in terms of showing the right emotions in the film and creating the right effect for the film. I think in particular his final scenes, although Olivier still is very theatrical, the scenes are still rather effective because of Olivier's energetic performance. This is not his best performance nowhere near it, and it certainly is a mixed, and in many ways a strange performance. Olivier though is an actor who can still give a good performance, even when it is a strange and weird performance.

I think that Olivier is a bit overrated, but I haven't seen this.

I will agree that this is not Olivier's best. I will also agree that Olivier is at his best when directed by Olivier.

I thoroughly enjoyed watching Derek Jacobi and Maggie Smith in this film (play). What a treat!