Harry Belafonte did not receive an Oscar nomination, despite winning NYFCC, for portraying Seldom Seen in Kansas City. 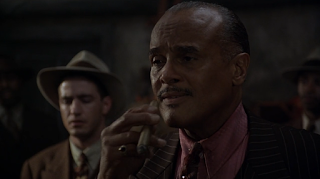 Kansas City is a Robert Altman attempt that just doesn't come together (in part due to Jennifer Jason Leigh's Achilles heel being on display, that being hammy attempts at portraying the Golden Age Hollywood style), not that it's terrible or anything, about a woman kidnapping a politician wife attempting to save her criminal husband who has been kidnapped by a gangster.

Well that gangster is played by veteran performer Harry Belafonte, better known when it comes to entertainment for carrying more than a few charming tunes, plays entirely against that type, though oddly enough in type compared to his role in Uptown Saturday Night, where he also played a criminal. This however is one with a far darker intention. The part of the film that works is when Belafonte is onscreen as Seldom Seen, partially due to the sheer power of his work. This in using his scraping voice to great effect as we early on see the man's wrath just bubbling as ponders on the theft in one of his cabs, by a man pretending to be black. Belafonte has such an ease in menace here that is downright startling coming from him. This is evident from his first monologue, as he has captured the foolish thief. This is as Seldom states his distaste for the man's choices though with this certain disturbing manner, as though he almost reciting a poetry as he speaks of it, though ends with pondering what he'll to do the man directly. In just the final few words Belafonte shifts his delivery, and his eyes suddenly, and so effortlessly create a chilling quality as we see the real threat within Seldom. Where the rest of the film kind of meanders around, you just awhile just await the return to Seldom's jazz club, to get what else we have in store from Belafonte, who despite not having nearly enough screentime, steals the film entirely. Belafonte sinks his teeth into every time we come back to Seldom, and get a bit more of Seldom's philosophy. Belafonte is brilliant in that while the scenes are all these philosophizing, that he not only makes sing, he manages to make them less artificial than they're written largely through the virtue of his work. His second speech on losers, directed as basically telling the thief he will die one way or another, again Belafonte manages to combine this certain breezy style as though he might be ready to say something, yet again deteriorates it as his eyes just grant this sinister glint of man essentially playing with his prey. Belafonte carries himself as this almost demonic philosopher that is just incredible work from him. The greatest of these perhaps being his racist joke he tells as a man is being violently beaten. The manner in which Belafonte brings to the tale is disturbing by just how energetic and gleeful he is. Belafonte creating this sense of a man with what is a most nihilistic worldview, that he makes vivid, while also just doing so in being downright captivating in each word he speaks. Even in speaking on the nature of death, it is with an optimistic smile he says as he ponders when it's time, but again with an even greater devious joy when remarking that he gets to decide when the thief dies. My favorite moment of his might be a mostly reactionary one where the thief tries to bargain for his life, through some minor threats. This in Belafonte as he builds in small reactions of disinterest, then slowly bemusement as the man offers to be his slave. Belafonte switch from a bit of joy at the idea of owning the man, then change so slightly into a hellish grin as he notes that he's really just most interested in the man's "guts" being his, and in that moment we see the unnerving determination that gangster has made for his victim. Sadly, to support the pun, Seldom Seen is seldom seen in the film, and the sum total of his screentime is limited. Belafonte makes the most of it creating such a fascinating villain in so well realizing the man's sort of callous philosophy towards life. If only the whole film was about Seldom, as Belafonte's work is worthy of mention with the best of Altman, the rest of the film...not so much.

Your ratings for Leigh and Richardson? I have seen the movie last week and i was really disappointed with Leigh, although i thought she was quite good in her final scene.

It's nice to get some quick-fire reviews during this horrendous time.

Louis: Your 30's and 60's cast/directors for Kansas City?

Louis, Could you watch Woody Allen's Everyone Says I Love You.

Leigh - 2.5(As with the Hudsucker Proxy, her attempt to do Golden Age style Hollywood couldn't feel more artificial and labored unfortunately. This is as Leigh usually excels with extremes, but this extreme is not within her strong suit. In this instance her Harlow impression becomes tiresome right off the bat, and keeps her character at a distance almost throughout. I will agree in her final scene, the one scene where she kind of drops the routine, is very good, but the rest of her work is weighed down by the ridiculous act of hers that is neither endearing or funny.)

Richardson - 3(Richardson honestly has the far duller role on paper, as she's mostly there to be a little grump, but slowly empathetic towards Leigh. I'll give her credit in that she at least pulls off the transition within the character, however the role as written, and having the misguided work of Leigh really prevents her from doing anything too interesting.)

Also, who do you think could've been a better fit for Leighs' part? Maybe Michelle Pfeiffer?

I should note, this was one of my least favorite Allen films, it just felt like a bunch of recycled Allen ideas with songs thrown in.

Alda - 3(Alda frankly is ideal for Allen, as he just knows how to maneuver his dialogue well. Also has the best song scene.)

Lyonne - 2.5(Despite being the narrator "lead", she doesn't have much to do overall. She's fine with what she has as the constantly changing romantic, but nothing notable about it.)

Barrymore - 2.5(Again, she's not terrible, but there isn't much to note about her work.)

Hawn - 2.5(Mostly just stands around until her final song, which she delivers well, but really underused.)

Norton - 2(Bizarre choice to do the Allen surrogate routine when Allen is in the film. Almost every actor struggles with the routine and he's no different. It's worse though because Allen is already there.)

Roberts - 2.5(Well she is certainly in it, but has so little to do that it is to the point though that she neither makes a good impression or a bad impression.)

Mulroney - 2(I think more unlikable than was even intended for the character, as I found he elicited no sympathy whatsoever. He's just kind of dull.)

Buscemi - 2.5(He's fine but just has very little to do other than doing a minor criminal routine.)

Murphy - 2.5(He's fine as well, but again just there to be a passionless politician.)

I mean the problem with the film isn't just Leigh anyways, the script just isn't quite there, as even Seldom Seen, I think could've flopped if Belafonte wasn't so good. But yes, I do think Pfeiffer probably would've been better, based on Batman Returns actually.

Louis: Thoughts on this monologue from Damian Lewis? I love the shading he puts into each "Brutus is a an honourable man." https://www.youtube.com/watch?v=q89MLuLSJgk

Louis: Your thoughts on the production design for Uncut Gems?

And lastly, to complement Albert Brooks as Howard, your choice for director and cast for a 90s version? Maybe Elliott Gould for Arno and Frank Vincent for Phil?

I have given my thoughts on Lewis's take before, not sure where however.

Uncut Gems productions design is particularly low key, and a lot of just great location work, but great in terms of creating the sense of Howard, in his apartment in particular. It is also just an example of some brilliant work altogether for Howard's shop, that is dynamic yet natural, in terms of the layout, the door in particularly, and the mirror ceiling, that is perhaps the most brilliantly used bit of production in the film.

Agreed on Arno and Phil.

Louis: I feel like 90s Sam Jackson might've been too old for Demany, since he's around the same age as Brooks (although I'll admit he's always looked younger than he is). I was thinking more of a Don Cheadle or Michael K. Williams for that role. Love the other choices though, especially PTA.

I'd say Jackson had the right vibe for the role, and those were the kind of roles he played at that time. Although Jackson was in his late forties to fifties in the 90's, he honestly was whatever age the role he needed to be older as in his actual age in (Jurassic Park, Die Hard 3), younger like general 30's in (Jungle Fever, Goodfellas, or Hard Eight (which is also the role that reminds me most of Demany).

Louis: Could I have your thoughts on Samuel L. Jackson as an actor?

Jackson fits into a certain group of actors whose talent is greater than their known cinematic presence, however frequently it is the latter that he is defined for. Now Jackson doing his "BAMF" routine is something he definitely specializes in and lazy casting often use him for basically a movie shorthand for a reason. Jackson's talent, at his best, far exceeds that. Whether that is in his Tarantino collaborations, The Sunset Limited or something like Jungle Fever. This is the lazy casting of Jackson is just of the badass who will say a few cool lines, well he can definitely do that, however Jackson can play a wide range of characters. This with either given more complexity to a role like that in Pulp Fiction, but also in terms of his ability to show greater vulnerability, and perhaps most importantly entirely change his presence. Jackson, despite having such a natural striking presence, can alter that effectively, whether that being in his age (where he's always been able to play with a good 20 years of time), or actual personality. His emotional range being far more than a glint and grimace, even if that is sadly the extent of some filmmakers imagination for Jackson.

Again, like Looking for Richard, it is a bit of grey area, as more of demonstration than a straight performance.

I have vague memories of seeing Popeye, but that's it.