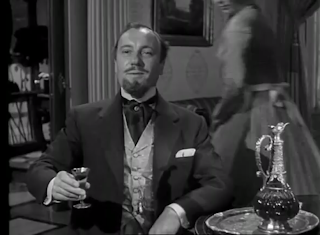 The Heiress tells the story of a plain but wealthy woman, whose life is changed by a conflict between her possibly less than honest suitor, and domineering father.

Austin Sloper is a rich man off his hard work as a surgeon. He has a large house, his wife has died and he is left with only his grown up daughter Catherine (Olivia de Havilland). Sloper is a highly intelligent man, and one of exquisite tastes. He expects people to fit his ideas of excellence and looks at those who do not very lowly, which includes his own daughter, who he views a plain unintelligent girl with not a hint of what her mother had.

Richardson simply could not be better in this role. His entire manner in this performance, simple amplifies the nature of the character. Richardson has the perfect style and grace that suits Sloper as well as possible really. Richardson perfectly displays the acidic tongue of the character especially well. I think is incredibly well shown in an early scene where Catherine wears one of her Mother's dresses. His quiet but incredibly cruel way of telling her she could not ever be her mother, is subtle but all the more coldly effective. Early he always shows a quiet distaste for his daughter which Richardson excels with because quiet but completely acerbic method.

Richardson displays Sloper's method of dissecting Catherine's suitor Morris Townsend (Montgomery Clift) equally well. I think he is especially apt at this when he is only watching Morris talk, and he listens, such as the scene where they all have dinner together. Richardson most of the time is just watching him, but he always shows that Sloper is breaking down, and piercing through Townsend's facade of sorts, just when he is listening. Richardson immediately  always shows that Sloper never really needs to be told anything about this mean, but he can see through him instantly.

Richardson builds up well Sloper's hate and dislike for Townsend and his general distaste for his Daughter's lack of anything special in his eyes. Richardson builds to each of the two confrontation scenes the one with Townsend and the one with Catherine, to make them especially powerful. Richardson in both scenes dominates the scenes with his incredibly powerful performance. Richardson is incredible as he tears down both of them, and telling them truly as he sees them. I think especially the scene with Catherine because Richardson makes Sloper's cruelty completely real, so much so that I never questioned that it would have such a changing effect on Catherine.

I think one other noted aspect of his performance that Richardson carefully handles is Sloper's relationship with Catherine. Richardson makes it clear he dislikes her lack of intelligence, and her overall painless, but I believe he manages to show that although he dislikes his daughter he does not completely hate her. Richardson does incredibly subtlety suggest I think that he does not entirely hate his daughter, he in fact does have the slightest hint of fatherly love, but not nearly enough for it to effect his overall treatment of her. It would have been easiest for Sloper just to simply hate her but Richardson does brilliantly show this, making it so the scene where he cannot bring himself to disown Catherine is entirely authentic.

The Heiress is simply a delight to watch for many reasons but most of all perhaps because of the incredible entertaining acting. The acting can be in a very dark and dramatic scene, but it remains a delight to watch because these actors light up the screen. These performers work outstanding together making truly outstanding scenes of performance with one another. Richardson for me stands out as well as de Havilland in creating a fascinating character, and a performance that I would watch the film alone for, it is that good.

Sir Ralph's performance never ceases to delight me. Way before I heard he was nominated for an academy award, I thought he certainly deserved one. Leave it to that two-bit, flea bag academy to go for a popularity contest. In an aside, from that late 40's era, another looked over performance was Louis Calhern in the "The Red Pony". Watch both old pros when you get a chance.