Dean Jagger won an Oscar from his only nomination for portraying Major Harvey Stovall in Twelve O'clock High. 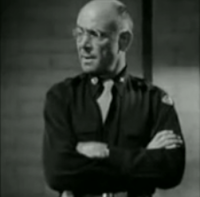 Dean Jagger portrays an elder officer at the air force base who has the difficult job of writing casualty notice letters. The role of Harvey Stovall I think as written is suppose to be sort of the heart of the film. The reflective and likable older officer is what he is suppose to be I am quite sure. Unfortunately one of my least favorite character actors Dean Jagger portrays him. Jagger for my always comes off very dully as an actor and rarely adds anything to the films he is in.

Jagger simply has a distinct lack of screen presence, even though I was watching the film for him, at times I would barely even notice he is in a scene due to his lack of charisma as a performer. Jagger, even when a scene centers on him, never creates a memorable characterization of Stovall. Stovall becomes just almost a functional character, because Jagger fails to really realize him in his performance.

Jagger stays rather dull and uninteresting throughout his portrayal, but hey he is even given a drunk scene. Jagger in his drunk scene is pretty bad actually. He frankly just did not seem to be drunk, or even acting drunk, he just was incredibly poor in this scene. In fact this scene was suppose to be quite a poignant moment, but Jagger was unable to bring any really depth to his performance, or even competence causing the utter failure of this scene.  Overall Jagger does have, I think, a good character, but Jagger fails to make anything out of what he is given. I do believe another better actor in this role could have made the character of Harvey Stovall really shine.

I don't think you have any understanding of the meaning of the phrase "fits like a glove." The role was secondary, dull even. Jagger is understated, dull even. He fit it perfectly, and shone because of it.

All I can do is disagree I mean firstly I know that fits like a glove refers to wearing socks, but other than that describing a performance as both dull and one that shines feels a little like an oxymoron to me.

I didn't describe the performance as dull: I said the role was dull. As I watched the film I thought he did brought interest to an otherwise dull role.

Watch this and see what I mean: crisis management - YouTube

Also, as I read my original comment these two weeks later, it sounds awfully harsh. I apologize for being curt.