Gary Cooper won his second Oscar from his fifth and final Oscar nomination for portraying Marshal Will Kane in High Noon. 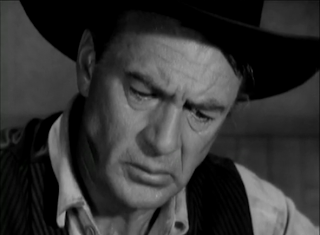 High Noon tells the story of Will Kane who must stand alone, due to the cowardice of the towns people against four men seeking revenge against him.

Gary Cooper is not one of my favorite actors, I find he has a lack of presence and power, especially in his voice, his performances can be incredibly dull as well. This performance though is his most iconic though, and usually regarded as his best as well. What he looks like in the film certainly is iconic and notable, his Marshal uniform, and the way he walks down the streets all alone certianly is memorable, but how good is his actual performance.

A major aspect of Cooper's performance that I usually criticize in his performance is a certain lack of passion or power behind many of his performances, but I will say this usually results from being too unemotional, and too withdrawn. Here his withdrawn personality actually works quite well for his performance. Will Kane stands in the middle of the film as a moral center, who must do the right thing no matter what will come of him. Cooper stands in the middle this time his face expresses honest emotion of sadness and dread but also am urgent responsibility to justice and what is right.

I think despite the effectiveness of Cooper's quiet expression that carry through film, many other aspects of the film threaten to undermine Cooper's portrayal. For example I really feel many of the other actors really overplay their roles, or underplay them sometimes quite terribly. This does leave Cooper to carry all of the wight in the film. Another threat to his performance is the back story the film attempts to, quite poorly in my opinion, juxtapose on Will Kane. The back story such his involvement with Katy Jurado's character seems out of place, certainly poorly fleshed out and does nothing for the film, and works against the effectiveness of the film.

Cooper manages against this though to give an honestly honest and effective performance. A simple performance but a truthful and powerful one. His performance of Will Kane is one that the audience can follow through his struggle of his hour before his destiny comes. Cooper gains empathy in this film during each of his disappointments and his entire struggle in the film. Cooper does this not really pleading for sympathy but truly earning with iconic characterization of Kane that really is effective. Overall this is a performance from Cooper which fulfills his role without effort, and creating what is his best performance.

I have to admit that I was never really a fan of this movie or this performance even though they are both classics. But I need to re-watch it.

Yeah, I felt the same way - I never really care for him so much as an actor to be totally moved by him (more of his fault, I think)