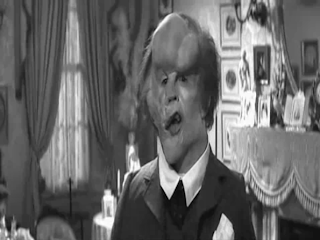 The Elephant man is the surprisingly touching story of a deformed man's journey to find human dignity in the 19th century.

John Hurt's performance as John Merrick is just about the pinnacle of the minimalistic acting. Hurt technically has many hindrances to give an effective performance. For example he basically cannot use his face, since it is almost entirely covered up with make up. He also cannot use his body really to do anything more than suggest the movements of the Merrick's disability.

I will say that the make up, and Hurt's manner as  Merrick made me never ever think I was really seeing an actor, but rather just the man himself. The way he walks and moves as Merrick always seem entirely natural, he never seemed like an actor ever doing any of this but just the authentic man himself. He never once overacts with a single mannerism which he could have easily. Although it must be said as well, that make up is incredible, and should have won a special award. Hurt though wears the make up in the right way, and does not let it do the performance for him.

The only assets Hurt really has at completely at his disposal overall, is his eyes and his voice. Hurt's eyes really are quite special here, because they always show the human, and humane quality of Merrick, which works to great effect. He is always able to convey the sad state of Merrick, but never as an entirely sad man. He display with only his eyes his fear of others early on, but also later he expresses the character's honest love and humanity especially well.  I believe his moment near the end of the film where he looks around in the theater, we see only through Hurt's eyes Merrick's true wonderment and happiness in that scene.

Equally special is Hurt's voice as Merrick. He is hindered as well in this aspect due to an imperfect mouth, and bronchitis, but Hurt gives Merrick and tender quiet voice from which he speaks. It is incredibly well used in the film as at first he struggles to speak words that seem meaningless to him. As he grows more comfortable with his surroundings he finally lets his voice out in a clear and meaningful fashion as he quotes his favorite passage from the bible. A striking scene and I think most of the credit, should come to Hurt subtle and moving delivery.

Hurt uses his eyes and his voice well throughout the film, even though still he remains a very withdrawn character, barring two scenes. One where he screams in horror from seeing himself, and another where he lashes out telling everyone that he is a man not an animal. Both well handled by Hurt, but I do believe his best moments, are his quiet tender, and heartbreaking moments. One scene in particular I think is his best, and most moving scene. It is when a theater actress Madge Kendal (Anne Bancroft) comes to visit him. It is a small, but moving scene as Merrick recites Shakespeare to her, and she recites back to him. It is a wonderful moment, and Hurt is perfectly honest, and loving in this moment, showing the real man behind his disfigurement.

Yeah I agree, I thought he was good, but not totally blown away.

I rank him 2nd after deniro,i have always found hurt inmpressive.