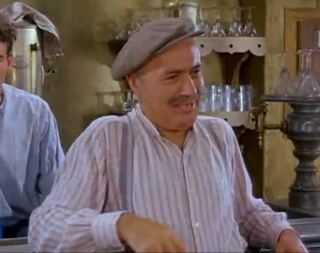 Fanny is an odd one, because it seems like it should be a musical but it isn't. I mean colorful locale, a rather simple story with various colorful characters, and Maurice Chevalier, one would think that would equal to a musical, but it is not, even though apparently it was on stage.

I guess the Academy did not value many lead performances from this year since Maximilian Schell was really supporting, as is Charles Boyer in Fanny, especially in the first half of the film. Cesar is the father of the young man Marius (Horst Buchholz) who impregnates Fanny (Leslie Caron), but hops on a ship to get adventure in his life. Fanny to not be disgraced marries another older man Panisse (Maurice Chevalier).

Boyer's Cesar is one of the colorful characters, a nice bar owner, who loves his son, even though he does get very much disappointed by some of his decisions. Boyer is nice and colorful, enough, and is good at portraying an over the top character without being too over the top. Boyer early on is likable enough, but I really do not think he would stick out all that well, if not for the fact that I was always looking for him.

Boyer really does not do all that much, but show love for his son I guess, and and act happy or surprised I guess, and occasionally saddened as the situation involving his son changes. Cesar always wants to do the right thing, always even if that means stopping his son from breaking up the marriage between Panisse and Fanny. I suppose he is properly strict, and saddened by his son, but still it never is anything all that special, or anything that really needs to be noted.

Overall Boyer's performance really fulfills his role as well as it probably could be filled, but the role just demands far too little from him. He needs to be nice, somewhat charming, and also a good figure in the film, and he does all of these well enough, but the film gives him no time to do anything more than this. Boyer is perfectly fine throughout his performance I do believe that, but even for a supporting performance it is a very limited character.

It really got me thinking.just 100 items?! I went to the smallest room in my house - the bathroom - and counted how many individual things were in there. If you would like to hear some of the songs on this album, ("Time & Place"), check out the link below. Lying naked along the bed, as A was in the dream, I allowed my body to imagine the sensation of sunlight warm on the skin, of air moving through the louvered door across me. was born in Bethlehem in Judea, during the time of King Herod, Magi