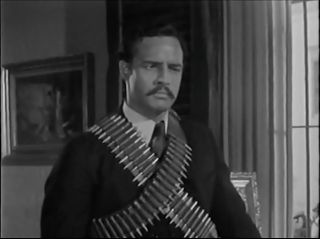 Viva Zapata! is a fairly effective fictionalized telling of the exploits of Mexican revolutionary Emiliano Zapata.

Marlon Brando portrays Zapata and something that must be addressed is his Mexican face. He has his darkened make up and his big mustache, that is noticeable, distracting at times especially when standing next to the real Mexicans like Anthony Quinn, but still it can be gotten over pretty easily since Brando still manages, despite this handicap, to give a strong performance.

I like Brando's performance because he really does not try to make Zapata a larger than life figure. He actually makes him a pretty simple man, who has strong morals, and a strong passion for his cause. Brando really keeps him a down to earth man, but shows a real honest desire to bring freedom, and land to his people he holds dear. Brando underplays Zapata always, and quite well, as he shows a certain anger deep within Zapata. An anger that has built slowly through his life through the mistreatment he has received from his unfair government. He always shows this deep anger he always clearly shows that he must contain to be a levelheaded leader.

He is equally effective as a quiet reserved leader. He has the proper passion and power into his performance, that really does not leave any question that he convince his men to follow him so easily. Brando's performance is effective in that he does manage to really show his strength as a leader without acting like a great leader, but rather a normal man who has just had this duty thrust upon him.

Zapata though does slowly change as a man due to becoming tired of the betrayals and the pains involved in the war in Mexico. He changes in two ways in that he slowly does become more disillusioned and begins to in turn become a more brutal leader. Brando earns this change well because he slowly shows the wears of his situation build up over time. His coldness he gains later in his treatment of his prisoners or his betrayers is made an honest coldness that has grown within Zapata due to what he has been through.

Another challenging change is made breifly when he is the leader of Mexico, and as he acts toward his neighbors just as the president did at the beginning acted towards him. This is a real challenge to make this sort of change believable but Brando handles it well because he showed the way time in battle built up on him. Of course Zapata quickly sees the errors of what he is doing, and does in fact handle this quick change just well showing what he did earlier was a result of almost his exhaustion of the wars he fought.

Overall Brando gives a strong performance. Brando never overplays his role, and never falls into any of the pitfalls one would expect he easily could have fallen into. A performance that gets over easily his technical miscasting because of his passion, subtlety and strength he brings to his role.  It is not Brando's greatest role by any means, nor his greatest performance, but it is certainly a strong piece of acting from the great actor.

I just recognised that I've seen this movie too and not only Cooper. However, I don't really remember, so...

Thought he was just terrific, and I liked the movie too :D