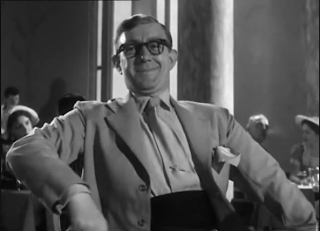 The Lavender Hill Mob I find is an extremely enjoyable heist film, that is both thrilling, and quite hilarious.

Alec Guinness portrays Henry Holland who is a man who makes sure that the gold is transferred from the foundry to the bank safely and soundly. He though has been planning on stealing it for along time, and gets the help from a lead novelty manufacturer Alfred Pendlebury (Stanley Holloway) and two low level thugs to steal the gold, disguise it as lead Eiffel tower miniatures to smuggle it out of England and become rich. Guinness is the one we follow through his scheme who I for one felt it was a pleasure to go with Holland through his journey thanks to Guinness. Guinness is one of my favorite actors and he almost always has a certain joy, and gusto to his performances which I love. Guinness as Holland gives a charming performance that leads the film quite well.

The main reason though I really like the performance is how enjoyable and funny I found Guinness throughout the film. I loved scheming with him through his plan, and that going through, and than dealing with the unexpected, it was joy all the way through. I usually empathize so much, not even with more serious performances but I just could not get enough of Holland. Guinness delivers all his lines with perfect timing, to add the right amusement, but I think he is best when he is doing his silent and physical reactions. I just find some of his perfect reactions downright hilarious in particular his reaction to being called boss, I just loved his reaction there, and another gem I think is when he is called an honest chap by one his fellow criminals. Guinness could have done just a reaction of happiness and it could have been nothing, but Guinness's timing and expression turn it into pure gold for me.

His performance is hilarious to me from beginning to end. I love the fun he has with the role, while always staying quite in character. Now describing comedy is not always easy, and honestly you either find it funny or you do not, you cannot be told something is funny than suddenly find it funny. So I personally found what Guinness did in the role comedic gold from when he beats himself up, to gets delirious running down the Eiffel Tower, to running and tricking the police at the end, He did it was grace and gusto and never missed a beat, and I laughed and smiled all the way through. Now there are prudes who need performances to be more emotional, more technical more dramatic in the tradional sense well Guinness does do some of that as well.

He makes his desire for the gold well attuned, and his constant thinking and dissecting at the beginning of the film is subtle but terrifically handled by Guinness. Also he puts on a facade all the time when he is with the bank people and everyone else, of a humble unambitious man. Guinness makes it completely believable that no one would ever suspect him of ever thinking of stealing the gold. He slowly peals it away and reveals more when he meets his accomplish Pendlebury, Guinness as well does this quite well, and shows a rather different man underneath. He equally is good and his loss of his facade though as his plans start to fall apart, and he fumbles a talk with the detective. Guinness shows him restless, but attempting to keep the facade but ultimately failing showing too much of the schemer within.

Another part that is equally well done is his chemistry with Stanley Holloway they are terrific together. I am surprised they did not make more films together since they are a true comedic duo in the best sense of the word. They work wonderfully together playing off each other well with the differences in their characters' traits, and attitudes. Also they show their joy, and friendship together very naturally and incredibly effectively. Overall this is a wonderful performance by Alec Guinness that is both effective and well done acting, but more importantly just a great comic performance, that I just love to watch.

I love all those Ealing Studio comedies. I think people forget that once upon a time, Guinness was primarily a comedic actor, and a great one.