Alec Baldwin did not receive an Oscar nomination for portraying Blake in Glengarry Glen Ross. 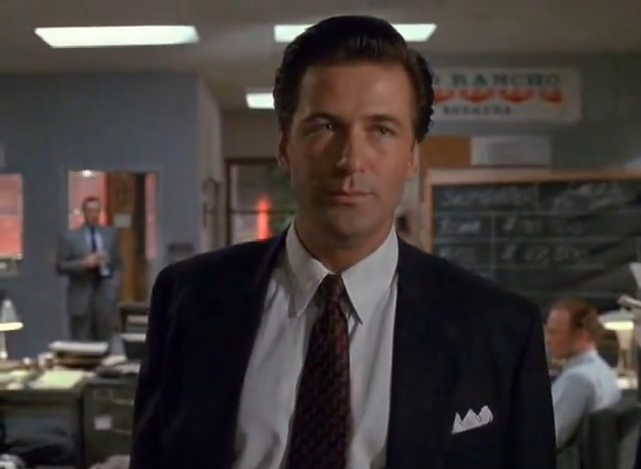 Glengarry Glen Ross has a terrific ensemble from Jack Lemmon's leading work, that I still scratch my head over how he failed to get any awards traction for, Pacino rightfully nominated turn, Ed Harris's portrayal of the loudmouth who blames everyone but himself, Kevin Spacey as one of the most punchable characters ever written, and Alan Arkin and Jonathan Pryce do some strong work as well in their smaller roles as rather meek men. Baldwin is actually only in one scene in the film early on as a motivational speaker of sorts who is sent by the men at the head office to "inspire" the salesmen who have been in a bit of slump. This role was not in the original play, and apparently written specifically for Baldwin to perform in the film.

Baldwin only has one scene yet his monologue is consistently one of the most mentioned aspects of the film. There is a reason for this as it is brilliantly written by David Mamet to be sure, but it is also brilliantly played by Baldwin. Blake begins his rant by basically bringing silence to the room and stating firmly that Lemmon's Shelley Levene is not allowed coffee because only closers can I have coffee. Closers referring to those salesman who manage to actually sell the properties they are hocking and close the deal completely. Baldwin starts like a military commander who has a serious bug up a certain part of his body as Blake verbally abuses all of the men without hesitation. Baldwin delivery and demeanor is fierce as if Blake could burst into violence at any moment although he won't it is the level of intensity that Baldwin brings to the role.

Baldwin's makes every insult sting just as it should and perfectly exemplifies the severity of the situation for the salesman by showing just how stinking uncaring Baldwin plays Blake as. Of course the viciousness Baldwin brings to the part is entertaining and gets the point across quite brutally, but I don't think it would be as memorable if he did not also bring across the more inspiring aspects of the speech. Well inspiring so to speak, as the reason Blake is there is to inspire them not to go make them go into despair, although the two can be confused but that's definitely the point. Baldwin makes the right changes in tone at the right moments such as when he seems to lighten up ever so slightly when asking Levene if he is going to grab those opportunities that are so obvious, or when he quiets down a little bit for some more direct humiliation for Ed Harris's character.

The film obviously continues for some time after Baldwin leaves as he has no additional scenes or even reminders in the script that callback to his character. Baldwin has just the one scene to call his own, but boy does he call it his own. Baldwin does not waste a second of the monologue and gives it the tremendous  impact it should have setting what it is that the men are up against really, but as well just being a scene that is great to watch. Baldwin's performance is fitting to the strength of the writing and the two come together in a most beautiful and brutal tandem. Although he has only one scene Baldwin still makes himself one of the very best parts of the film. With all the great moments it could have been easy to forget this one, that definitely does not happen though and it is no surprise that this is the most remembered scene of the film.

Louis: what were your ratings for the rest of the cast.

I'd probably give him a 5. A perfect example of a one-scene wonder, who's impact lasts throughout the film.

One of the greatest monologues, perfectly delivered.

Louis, without spoiling possible reviews, what would your ratings be for the cast of Inglourious Basterds?

Louis, if you don't mind could I have the following ratings/thoughts (all a bit random):

David Bowie in The Prestige
Keira Knightley in Pride and Prejudice
Tom Felton in Harry Potter and the Half Blood Prince
Alan Ruck, Matthew Broderick and Jeffrey Jones in Ferris Bullers Day Off
The cast of The Breakfast Club

I'll change my predix slightly. I wasn't sure whether Baldwin would get a 5 but guessed he would.
1. Paul McGann
2. Alec Baldwin
3. Richard Harris
4. Samuel West
5. Steve Buscemi

I love this film lol its like watching a Tony nominated play on broadway.

@Louis and RatedRStar: Speaking of Tony, Leung to be specific, have you both seen this years Hong Kong Film Award nominations, what do you make to them?

Blarg one of the reviews is out already!!!! I wanted to wait til I saw Alien 3 but I'll have to take a leap of faith I guess....

Changing my predix, too.

Yep me 2 lol is everybody changing haha.


@JackiBoyz: I can really only comment on the acting categories, which are good enough I think, with some actual surprise nominations like Zhang Jin and Anthony Wong, its interesting that there is 2 IP Mans nominated lol. Zhang Ziyi is a lock to win for definate although I would vote Tang Wei.

Love this movie, love its cast! However, in my opinion, Baldwin's monologue is actually one of it's weakest parts. It's acted briliantly, but it seems to me that it hammers in just a bit too much this whole "sell or die" thing. But that's just a minor nitpick.

Louis , what you do rate him for BeetleJuice? Also Keaton ?

Well, I'm keeping my predictions since I'm not a wuss like you guys haha. Just kidding but Louis who did you prefer, Pacino or Baldwin?

Felton - 3(Adjusts to a more somber performance pretty well, although he did not leave that much of impression me. That film could use a rewatch though)

Ruck - 3.5(Interesting precursor to Edward Norton's performance in Fight Club. Anyway I find him the most sympathetic and endearing element of the film)

Jones - 3.5 (He's pretty entertaining here in a similar vein to John Vernon in Animal House, although not as entertaining as Vernon's work)

Broderick - 3(I have never cared for Broderick, but he's fine here although probably not as charismatic as Ferris technically should be)

Estevez - 2.5(Pretty forgettable, and I never thought he got down enough of a jock vibe really)

Nelson - 4(Very entertaining performance, but as well surprisingly moving in the scene where he gets confronted by the principal)

Gleason - 3.5(Does more than usual jerk shtick, which he does as well, but handles the scenes where the principal is out of his element well)

Pacino although they are both on the same level to me.

Louis: your thoughts on Laurent, Kruger & Menochet in Inglorious Basterds.

Laurent - 4.5(Does a great job of balancing the sides of her sides from the avenger to the woman filled with fear she may be found out)

Menochet - 4(A powerful one scene wonder and plays off Waltz so well. He actually amplifies Waltz's performance by showing the affects of Landa's interrogation throughout the scene. I've always found his expression when he gives up the Jews particularly heartbreaking)

The guy killed by the Bear Jew haha lol.

Louis, what are your thoughts on Spacey, Harris, Arkin and Pryce?

Arkin (Arkin apparently came up with his own back story for the character which was that he was a fired teacher. Arkin nicely brings this with his performance making him meek but suggesting a goodhearted nature in him)

Pryce (He's such a good sad sack in both of his scenes. First showing the enthusiasm of being pulled in by Roma, almost just because he finds Roma cool, then later so perfectly sheepish as he asks for his money back)