Robert Carlyle did not receive an Oscar nomination for portraying Francis "Franco" Begbie in Trainspotting. 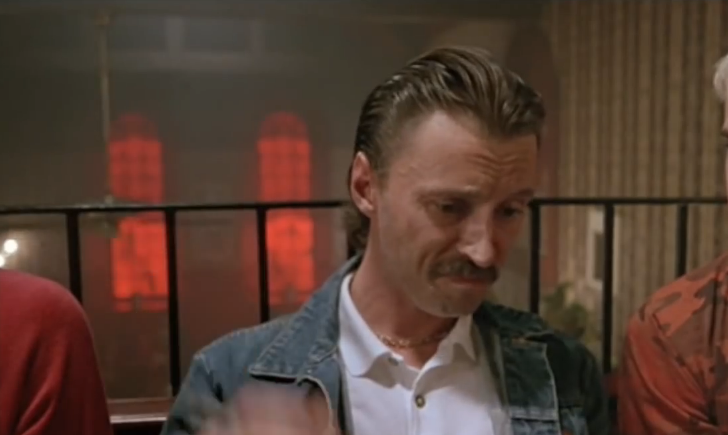 Robert Carlyle plays Begbie the only member of the group of friends in the film who is never uses heroine throughout the course of the film. This hardly makes Begbie the most sympathetic or most intelligent of the friends though in fact it is quite the opposite. Although Begbie avoid heroine he instead enjoys a quite a lot of hard drinking, and all that seems to come from hard drinking. Carlyle performance early on is instantly striking in his portrayal of the one friend who never seems to retire from anything, certainly not from reality in at least the way the others do. Begbie is an extremely different man from the rest of them and Carlyle absolutely makes the makes the most of Begbie's uniqueness.

Carlyle plays Begbie as a constant time bomb of sorts who seems to be tightly wound even when he hanging out with the bloke. Carlyle is not even a particularly imposing man all by himself but in a very Joe Pesci sort of way there is always a volcano about the erupt. Carlyle makes Begbie unpredictable in his manner and frankly a slightly uncomfortable man to be around because the way he plays him you don't know exactly when he's going to snap as he always keeps the possibility open even when he seems to be calm. In his calm seems Carlyle is very good in being the big talker though and even the way he seems to look suggests an incredible self absorption on his part. Whenever Begbie is going on about something Carlyle makes it clear that no should ever interrupt Begbie as his mindset is set firmly in place.

Everyone one of Begbie barroom tantrums are a highlight of both Carlyle's performance as well as the film. Carlyle pretty much makes it his picture in every scene where he a very specific manner he takes as Begbie gets ready to beat down an unknowing bystander. Carlyle plays the scenes brilliantly as every part of it seems part of an exquisite plan that Begbie has in mind. This could seem overly mannered but it's not for two reasons one being that Begbie does definitely have a certain plan when he does this but as well Carlyle makes the whole process completely natural to the man he creates. Carlyle in these scenes fires on every cylinder in his performance. Firstly these scenes are extremely entertaining as Carlyle brings such a powerful flamboyance that is fun to watch, and it works because Begbie definitely wants everyone to notice him.

Within the intensity of his anger though Carlyle is careful, in the barroom brawls, to really bring the joy of Begbie's own performance into it as he has a strong sadistic streak. Carlyle is particularly good in those moments where Begbie handles his knife showing the great pride he has with what he does with it, or chooses not to do with it. Begbie's outbursts are his highs, and Carlyle brilliantly establishes this fact. Importantly when he just threatens one of his friends Carlyle rids himself of the joy though showing that towards his friends his anger is strictly basically his only emotional response he really knows. In his attacks though Carlyle also brings a constant command and pompousness in his manner showing that Begbie is as well trying to prove his dominance with his actions, and attempt to prove himself as something greater than he is.

Carlyle is given several of the big acting scenes of the film, and he does not waste his opportunities. Everyone of his scenes he takes to the fullest and gives a particularly striking performance. What is great about what he does is that he does not go over the top really, because Begbie is an over the top guy so technically speaking Carlyle is only being entirely natural to Begbie as himself. This might have not all worked or just have been enjoyable but unfitting moments but Carlyle brings it altogether in the way he plays Begbie in every scene. Due to Carlyle keeping that intensity always a factor these scenes are only ever the right transition for who Begbie is. Carlyle is excellent here because he sets himself clearly as one of the best parts of the film, and distinguishes himself clearly from the rest of the cast.

What did you think of Secrets and Lies, and Timothy Spall's performance in it?

Luois If you do 1983 , please consider reviewing mickey rourke in rumble fish.

Louis: Can I have your ratings & thoughts on Naomi Watts in:
21 Grams
King Kong
Eastern Promises
Fair Game
The Impossible

Matt: I thought the film itself was great. Spall, who I would give a five, was amazing in playing the quiet moral center of the film. His subtle performance resonates especially well, and he makes the outburst at the end particularly powerful.

21 Grams - 3.5(A bit of mixed bag from Watts some moments she's very moving but some of her line deliveries were way over the top by the end)

King Kong - 4.5(The best part of the re-make if you ask me. She is a great heroine to follow through her consistently endearing and energetic presence)

Eastern Promises - 4(A limited role in the scheme of the film, but she excels with what she does have.)

Fair Game - 4(Rather liked her performance even though she was saddled by Penn unfortunately. She delivers her part though with the appropriate passion)

The Impossible - 4.5(A great searing work from here. The role requires technically speaking the simplest of emotions but she delivers them so honestly)

Jean-Baptiste - 4(She's good in playing off the other performances and realizing the awkwardness correctly, although overall Spall and Blethyn left a greater impression)