Edward G. Robinson did not receive an Oscar nomination for portraying Christopher Cross in Scarlet Street. 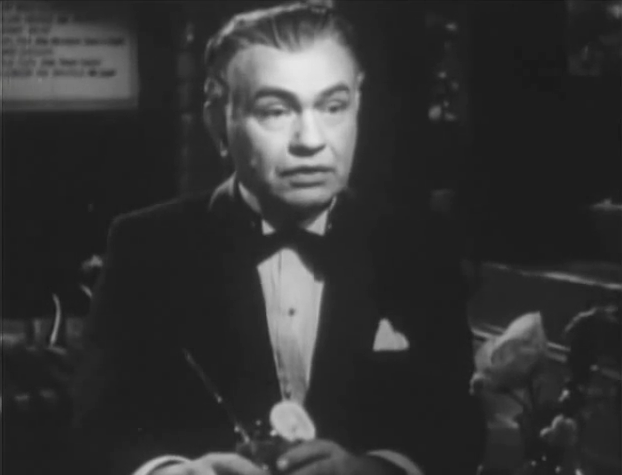 Scarlet Street is Fritz Lang's followup to The Woman in Window which once again reunites Edward G. Robinson, Joan Bennett, and Dan Duryea, who was Lang's go to guy for a slime ball in the mid 40's. The film is a fairly strong film noir of sorts about a sleaze ball couple trying to manipulate an older man. My only problem with it is that Robinson and Duryea are considerably more interesting performers than Bennett, although she is better here than she was in her previous collaboration with Lang.

Robinson is out of his most known mold again here as the overly aptly named Christopher Cross who is an aged cashier who by chance comes across a young woman after he stops her from an apparent mugging. Where Robinson in his earlier effort in Lang played his character as an old man who just really was too old to get involved with such a plot, here Robinson has a completely meek role which is certainly different than his usual type of character. Robinson though is very interesting in his performance and changes his usual screen presence. Where Robinson usually plays parts with a firm voice and strong intensity in him here Robinson appropriately switches to a weaker somewhat wavering speech pattern, and in general his physical state is far more retiring than usual.

Christopher is a rather pathetic sort who we find being pushed around by his wife constantly, and his only solace is to pursue the younger woman who he fails to realize is just trying to extort as much money out of him as possible for some feigned affection. Robinson manages to be quite moving as Chris because although his intent is definitely to commit adultery he makes it easy to see that all Chris is looking for is some genuine affection from someone which he never gets from his wife and thinks he can get from this young woman. Robinson plays up the meekness just enough so that Chris does not become a parody, but makes it it extremely easy to see why it is that Chris is so easily tricked by always emphasizing that desire for some sort of greater comfort.

The only time that Christopher seems truly happy is when he painting or discussing painting, and Robinson pulls away the meekness to exemplify a stronger passion within the man, although never stronger enough to really come right out and do something for himself. Robinson is very effective by giving the truth to the situation as Christopher continually is mistreated over and over again and he basically just keeps going more and more. Robinson makes Christopher's yearning something very strong within Christoper as there is always a certain earnestness within him, yet at the same time he shows it as something that weakens him as the yearning forces him to do basically anything that he will believe will finally fulfill him.

Robinson finds the right dynamic for Chris in his early scenes and builds the intensity until soon enough that Christopher finds he has been misused the entire time, which leads him to the murder. Although I do think the scene he is earned by Robinson I do feel Lang's does not quite give the scene the impact it should have by the way it seems to rushed. Technically it could have either been faster paced for the purpose of being more dramatic or slower to build to the moment a little more but Lang's takes a slightly awkward approach which weakens Robinson's performance a bit. Luckily though the film immediately picks up afterwards though as for once in the 40's a murderer not only gets away with it even allows another man to be executed for it.

Christopher despite avoiding execution hardly gets to enjoy much of it as he losing his wife, his job, and can't even take credit for his paintings that have become popular lest it lead him to the execution chamber. Robinson's is excellent in these final scenes of the film as he portrays the complete degradation of Chris as he has to deal with both the guilt of his crime but as well be haunted by the fact that no one actually ever cared for him. It is remarkable to see Robinson play such a vulnerable cahracter but he absolutely pulls it off and creates a palatable despair in his characterization making it so the ending the film has the needed impact that was a bit lacking in the murder scene. This is a strong piece of work by Edward G. Robinson and proves his abilities went beyond the fierce quick talkers he is known for.

I really liked Robinson, I thought Duryea was ok, I dont think he would make my ballot for supporting, 3 actors from films that are not being reviewed would be in the supporting ballot though =D.

Louis , how do you choose who you are going to review? I just read your Alternate Supporting Actor for 1991 and Joe Pesci was # 4 , yet you did not review him.

YES. EVERYONE IS CONVERTING. THE WORLD WILL SOON BE MINE.

Anonymous: My five are not always my top five, or the top five not nominated for a few reasons. One sometimes there will be request which can easily be performances I do not care for, secondly I often do what are considered the popular snubs or considered the best of the year, as well as I take note of who is the most suggested in the comments as well. I do take my own personal preference into account of course as I always want to review my personal favorite.

Hey Louis, can I have your ratings and thoughts for Bruce Willis in Die Hard and the Sixth Sense?

Die Hard - 4.5(It's no surprise he broke out to super stardom after this one as he carries every action scene effortlessly while bring an appropriately humor and charm to the film, and even a dramatic heft when he needs to such as the scene where he's pulling the glass out of his feet)

Sixth Sense - 4(Much quieter work from him no doubt, but he's effective here carrying the right somberness to accentuate his character's history, but he offsets it with the right warmth in his scenes with Osment)

If you don't mind, Louis, ratings/thoughts on:

Joseph Fiennes in Shakespeare in Love

Also, ratings for The Room ;)

Still need to see Levitt and Murphy, really should get around to those films.

Bell - 4(Very good child performance as he comes across natural throughout the film, and makes for an endearing enough lead)

Fiennes - 2.5(All Shakespeare really needed to be for the story was charming unfortunately I feel the younger Fiennes has neither the screen presence nor the charm of his brother)

Whishaw - 3.5(An enjoyable bit of work that works particularly nicely as he had great chemistry with Craig)

Janjigian 2(He came off as a drug dealer, so good for him)