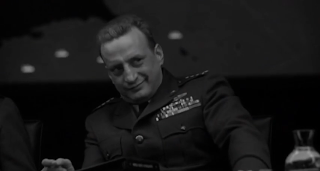 The apparent story behind George C. Scott's performance in this film is a rather interesting one. Scott apparently wanted to play the role straight, but Kubrick wanted Turgidson to be an absurd character. Scott supposedly refused, but Kubrick would have him do just one wild take then Kubrick proceeded to only use those takes in the final film. It's a story that certainly shows the importance of a director hand in performances, but the reason I don't usually mention this in reviews is two fold. One being it is impossible to tell exactly who came up with the way to play a character in every single film, and more importantly no matter what the basis may be for the character George C. Scott is the one still making or not making this idea work through his performance.

Anyway with that out of the way how about what Scott does with the approach of making Buck Turgidson perhaps the wackiest character in the film. This is rather a departure for Scott particularly from his Oscar nominated works in The Hustler and the Anatomy of the Murder, and is really something to see Scott, who often plays rather controlled and strict characters, go completely off the wall in his performance. Scott never stops with his performance always moving in some way and gives a completely insane performance to go along with his rather insane character the entire time. It is so easy to see how this whole approach could have seriously failed because Scott makes Turgidson so big and it all could exploded but this never happens and there is a reason for that.

The reason being he's George C. Scott. Scott is on top of it every step of the way and makes his performance one absurdly entertaining moment after another. Buck Turgidson is a General called in by the President to find out why bomber planes have been launched by General Ripper (Sterling Hayden), and then proceeds to act as one of the advisers during the crisis. Scott is great playing Turgidson as a man who is far too pumped up for his own good so, unlike everyone else who sits nicely in their sits around the large table, whenever we Turgidson he can't seem to relax always moving slightly in his chair or chewing gum. Frankly Scott is always doing something and it all simply works in one building up his boisterous character, but as well being just plain funny.

Where Sterling Hayden wore his character's insanity in an icy stare, Scott wears Buck Turgidson's in just one big smile. Scott with his boundless energy portrays Turgidson as a man who believes in practically everything he says and some of the most extreme things he says is all the funnier because of the personal conviction Scott shows it as. When Buck Turgidson tells one of his ideas he does not just like his idea Scott plays it as he is deeply in love the with idea. Scott's hilarity never ceases as he brings the utmost enthusiasm to every single word that Turgidson spews out no matter how crazy it seems and well is. Scott never misses his mark once and makes every scene more enjoyable with his mere presence.

Scott is magnificent and never feels stale in this turn nicely avoiding this by not making Turgidson one note even if the character, and his performance are rather extreme. One of Scott's best moments is when Turgidson is reading off information to the President presenting a less assured Turgidson and being rather amusing by showing Turgidson as a man who really does not know all that much. Another great moment is while in the war room he gets the call from the secretary he is having an affair with who wants to talk about their relationship. Scott again brings the very best out of the comedic possibilities of the character by making the man who is so comfortable talking about the deaths of millions, but instantly appears to be queasy when faced with talking to his girlfriend.

It is strange to learn about the behind the scene story because Scott is the clown needed for the war room scenes with his constant physical antics that Scott pulls off so flawlessly, heck apparently Scott actually did fall in the role but Scott just went with making it classic moment that fits Turgidson so well since he never stops moving anyways. This is a case of Scott pretty much going all in as this performance is an all or nothing characterization, and taking home the pot. This performance simply works that is all there is to it, and Scott turns in one of the all time great comic performances. He is incredibly loud, extremely flamboyant and downright crazy, and you know what, I would not want Buck Turgidson any other way.

I think this film is flawless, I especially love the war room lol I wish my bedroom was like it haha.


Off topic Louis and everyone else, there is a good chance that 2013 Best Actor or Best Supporting Actor could be the very best ever.

Chiwetel Ejiofor (performance looks like its gonna get a 5)
Tom Hanks (Louis admitted he did like him so we are in good hands if he is nominated)
Bruce Dern (reminds me of Richard Farnsworth or one of them quiet 5 star performances)
Matthew McConaughey (Everything he touches now turns to gold)
Robert Redford (One man shows often do well with Louis like Franco and Dan O Herilhy)
Leonardo DiCaprio (usually does very good work, looks more energetic then usual)


Looks like Forest Whitaker is gonna be the person I will be most happy if he doesn't make it to Oscar.

Out of those 6, I have yet to see Dern and DiCaprio. I think Nebraska looks very entertaining and Martin Scorsese is pretty much infallible in my eyes so I'm excited to see Leo's work, but I'm not excited for the whole world to lose their shit if he doesn't get nominated or win. McConaughey is still my pick.