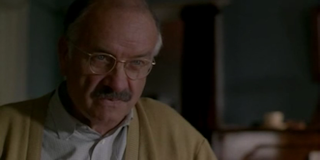 Mueller-Stahl plays the father of the troubled pianist David Helfgott. This is the sort of performance that only unfortunely seems to be held back by the somewhat lacking script in the film. Peter is just basically a tyrant in the film who wants just what he wants out of the children. He believes that they should all work as hard as possible as well as be tough in order to survive. He harsh toward his children but insists on them particularly David recognizing how lucky they are since he lets them (forces them) to play music, something his own father never allowed.

The problem with the performance comes with the film's refusal for Peter to be anything but the tyrant. He is almost always the tyrannical father at all moments, he only lets up ever for the briefest of moments. When he does let up Stahl does not show it as ever being easy, but only being a difficult choice, becuase he has basically no other option. This is a performance that I do like, but I only wish that he has been written as more than basically just an advisory to David's independence but rather a little fuller of a character on his own terms. This is a good performance but held back by the limits of his part.