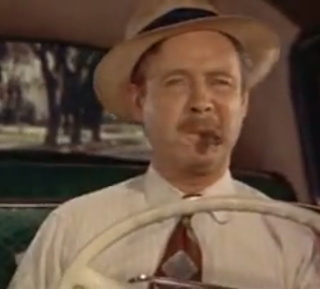 Picnic is a very melodramatic film about a drifter Hal (William Holden) who visits a small Kansas town looking for work.

O'Connell plays one of the locals an older man who owns a store and is thinking over becoming married to one of the local school teachers Rosemary (Rosalind Russell). He is hesitant to give up bachelor life though. In fifties melodramas it is easy for one to give a rather melodramatic performance, or a very dull one. O'Connell thankfully though is a rarity in this situation and in this particular film as he does try his best to give a natural performance.

O'Connell's actual character is quite limited though in the scope of the film. Howard is there and shares small romantic scenes with Rosemary. O'Connell has descent chemistry with Russell even though it not especially special but it does manage to make their relationship believable. Howard past that just remains as the most sensible person who does not immediately jump to conclusions nor get all melodramatic all of sudden either.

O'Connell gives an appropriately charming performance, and never gets sucked up in the overacting or dullness that some of the other performers do in this film. I still cannot say that this is a great performance by any means though the part of Howard requires little of him in the very end. I will most certainly give him his due credit though as he does play Howard exactly as Howard should be portrayed.