Robert Ryan received his only Oscar nomination for portraying Montgomery in Crossfire. 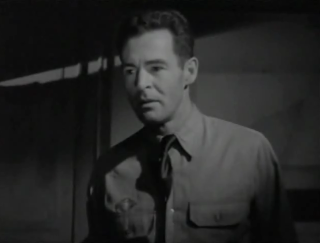 Crossfire details the investigation behind the murder of a Jewish man.

This really is going to be a spoilers review as the film is a mystery and to really get into the qualities of Ryan's performance. Although I must say this mystery is made quite predictable becuase usually when a film is a mystery film is and that mystery film has a nomination in the supporting actor category it usually gives away who the killer is. Also the fact that Robert Ryan is in a movie is a dead give away to who is the killer since Robert Ryan was type cast as a cruel antagonist.

I knew the second he walked on screen in the film that he was going to be the killer anyways since Ryan just naturally has an unsavory quality to the way he looks, which is why he played this sort of role so often. I must say this is not the best version of this sort of role for Ryan though as I greatly preferred his work in Billy Budd for example where there seemed to be a greater mystery to his villain and with that made his character far more chilling in that particular film.

Ryan tries from his first scene tries to avoid suspicion in the role of Montgomery although he certainly gives an effort to seem innocent and naive, he simply is Robert Ryan so I know that he could not possibly be good, but really that is not his fault. Ryan actually does fairly good job of showing Montgomery's attempts to try to throw off the investigation by acting unaware of the whole thing, although with the right undercurrent knowing the truth that he clearly is always hiding.

Robert Ryan though is best at what he does best which is being the intense vicious villain. Ryan is appropriately cruel and chilling as he shows that Montgomery really is a racist with absolutely no sympathy for anyone, especially not Jewish people who intensely hates. Ryan does not show any reason behind Montgomery's hate other than just hate that has clearly been with Montgomery for a long time. Although there are not a lot of surprises in this performance there is a reason Ryan was typecast in this sort of role, because he was very good at it as he shows here.