Edmund Gwenn won his Oscar from his first nomination for portraying Kris Kringle in Miracle on 34th Street. 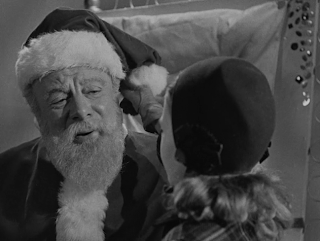 Miracle on 34th Street depicts the story of a Santa Clause who becomes the Santa Clause for the Macy's day parade and later for the store, the only problem is he claims he really is Santa Clause.

Edmund Gwenn I imagine won by a great deal for his performance here as Kris Kringle, since it is unlikely much consideration was given to Gomez and Bickford whose films received few nominations, and it certainly would not have gone to those rather nasty characters Ryan and Widmark play especially since neither have a single sympathetic quality. Also Miracle seems that it was likely second place for best picture considering it won story and screenplay, but it lost I feel only because the Academy wanted to seem important by going with the "important" picture.

Also Gwenn is really not supporting in this film he is the subject of the film and the lead actor of the film, it is not an overly egregious nomination since there is at least the other lead of John Payne, but really Gwenn most certainly is lead. Also what is not to like about Santa Clause. This is not a only a unique nomination but also an exceedingly unique win as usually Santa Clause is not the sort of character one would expect to receive a nomination let alone an Oscar win.

This review is for the very day the film begins in, and it is hard to say anything bad about Santa Clause, but I won't let any of these factors change my view of Gwenn's performance. Gwenn really does not take any sort of unorthodox approach to playing Santa Clause he is nice and gentle as he should be. He is warm and kind just as he should be. There is also a bit of a no nonsense part of him though as he does not like people who do the wrong thing either. Gwenn even shows this aspect to be still Kris Kringle merely wishing that only everyone should be nice as well.

Gwenn really is just fine in the role of Santa Clause, but if you have seen Gwenn's other performances like in Mister 880 for example his performance is not that much of a stretch for him. This is basically how he played any nice old man role no differences to attempt to make him any more Santa Clause like in the least. His style of performance though most certainly works for the role though, and I have no issues with the way he plays it either. His Santa Clause certainly is not definitive in any fashion, but he is as he should be.

There certainly are wrong ways to play Santa Clause but most of the time he is on film it is not that hard to get him right, just have a kindly old man who has a beard or at least can grow one who just seems to be respectable not much more than that. Gwenn is not a definitive portrayal of Santa Clause by any means but he is one of the better ones. Gwenn is consistently good, but his performance is not even my favorite of the film that would go to the duo of Gene Lockhart as the rather pathetic judge, and William Frawley as his blunt campaign manager. Yes it most certianly is fun for Santa Clause to win the Oscar, but in the end this only just a good performance not a great one, and certainly not better than Richard Widmark.

He's really lovely hear, I mean he plays Santa but as you said, he's not great.

I think Natalie Wood gives the best performance of the movie. :)


How old were you when you stopped believing in Santa?

Well Joe I really do not remember all that well.