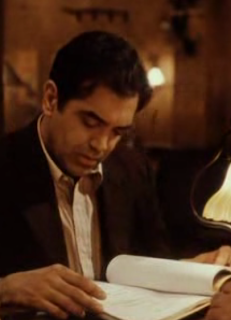 Bullets Over Broadway is a pretty straight forward Woody Allen comedy about a play production that becomes interwoven with mobsters.

Palminteri portrays Cheech who is a mobster hitman assigned to protect his bosses' girlfriend Olive (Jennifer Tilly) well she acts in a play written by David Shayne (John Cusack). The interesting and original part of Cheech as a character is that he turns out to be a brilliant play writing ability who ends up rewriting the whole play for David. Palminteri plays his role in a basically straight fashion which does work much better for his role than if he tried to be comedic.

I must say this is more a great character than exactly a great performance. The character is just a funny idea, and Palminteri portrays him in a typical mobster hit man fashion. He has his casual demeanor, but also his ability to be threatening.  The difference is that he does want the play to be good after he writes it which includes perhaps taking care of a bad actress. Still even in the scenes when he is talking about writing Palminteri does it in a calm and cool gangster sort of way. This is perfectly fine since that is what makes the character funny is that he is a normal gangster who just happens to be able to write. Palminteri overall just fulfills his role well, and does really play the part exactly as it should be played.

I liked this performance. Do you think Wiest deserved her Oscar?