Victor McLaglen received his second and final Oscar nomination for portraying 'Red' Will Danaher in The Quiet Man. 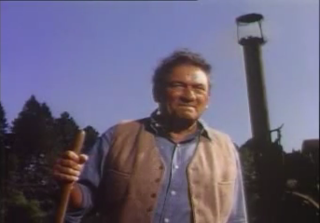 Well this perfect timing to review this performance on St. Patrick's day, a film all about Ireland. Anyways this is one of my favorite films ever, about  an Irish born, but American ex-boxer Sean Thorton (John Wayne) who runs from his past in America to go back and settle in Ireland in the cottage he was born in.

Victor McLaglen portrays a character certianly in his type that have a large brutish fellow, unlike in his Oscar winning performance in the Informer, where he was a brutish fellow but a modest one as well, this one he is a very loud obnoxious man. Danaher is basically a friend of no one and particularly dislikes the Yank Sean Thorton from the first time he sees him. This comes to quite a problem when Thorton wants to marry his sister Mary Kate (Maureen O'hara), which he objects to quite quickly and quite stubbornly which due to tradition means they cannot even date.

McLaglen is loud most certianly in this role. He always is taking up the screen in more ways than one, which I must say is the perfect style for the role of Danaher. I really think Danaher could have been played all wrong, in that he could have seemed too threatening, and without a comedic edge to the performance, but McLaglen finds precisely the right tone for his performance I think. He certainly is loud, and obnoxious and is properly over asserting, but McLaglen makes his boorish behavior actually fairly effective, and at the same time entertaining. He manages to create a good amount of humor due to some his reactions when he loses about something, or gets insulted in some way.

An interesting part about Danaher is that usually palooka characters like these are generally written incredibly simply. Danaher is a little different in that they actually write in that he himself wishes for love with a local rich widow. Now he makes rather amusing indications of this when he attempts his non too subtle come ons to her. He is in fact tricked because of this desire by locals to allow Sean Thorton and his sister date and marry by making him think that if he does the widow will marry him. On the wedding night of Mary Kate and Sean Thorton though he realizes the trick when the widow rejects him. I think McLaglen was actually quite good because he managed to make me actually a little sorry for Danaher as he pleads, and questions the others what went wrong before he figures out the trick.

Well anyways he denies the married couple the dowry causing marriage trouble between the Thorton's which leads to him and Danaher duking it out in one of the best fights in film. It is not because it is a dramatic fight, but rather because it is a hilarious rousing fight. I think actually even here McLaglen actually does still excel, because he could just fight, but some of his reactions in the fight I find are just gold. The best part of the fight is the end where he and Sean share a cold drink become friends. This would seem like an utterly impossible notion, but McLaglen makes it utterly believable showing his boisterous nature was a bit of a facade all along. Overall a performance a like very much, that could very well have been nothing, and just adds to a film, I already adore.

I thought he was overacting most of the time, but I assume that was kind of the point.

Yeah I will grant you that, but I thought that thoroughly worked for the part.