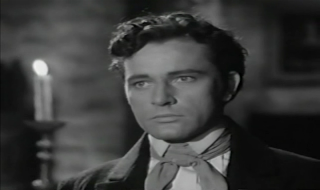 My Cousin Rachel is an effective film, although somewhat lacking about a young man who falls in love with Rachel the widow of his favorite cousin. He also though is unsure if she did or did not have something to do with his death.

Richard Burton is no question the lead in this film not supporting. He is in a greater percentage of the scenes in this film than he is in some of his lead nominations. He is also the focus of every scene, it is about his character and his perceptions of Rachel (Olivia de Havilland). This was either the first leading performance by Richard Burton or at least his first prominent one. It is quite interesting to see the young Richard Burton with the exuberance of youth, something quite absence from say his final Oscar nomination for Equus.

Philip Ashley is a rather interesting character actually because it is a character where the age of the character matters. The very key part of his character is his age, and his urgency as a youthful young man who really does not want to ever be considered unable to completely understand something or be able to take something because of his youth. Burton's youth and somewhat inexperienced performance actually works quite well for the character of Ashley. Burton does not have a fully comfort on screen yet quite clearly, he never commands as he was able to easily later on in his future performances.

Now this might sound strange praising something technically lacking from the actor, but it work well for Philip who is inexperienced in his understanding of life. Burton lack of command completely compliments the lack of Philip's command in the film. It is strange to say this but a more experienced Burton perhaps would have given a lesser performance. He really shows the mixed passion, and lack of complete understanding well in his performance. You never know what Philip is quite feeling except for brief moments, since Philip himself does not know, and Burton stays properly mixed up in his performance which works incredibly well.

I thought Burton fulfilled his role incredibly well, and made his love of Rachel, and his paranoia around her all work, because of the lack of precision of his performance. Now part of me wants to give a higher rating, but another part wants lower because technically what I like about the performance may be technically Burton's lack of inexperience as a film actor. Well I don't know maybe that is just Burton wanted me to believe. I must say I am not quite sure so I will have to settle for a good, but safe rating for Burton's performance.

Haven't seen this one either.

I wasn't really impressed by him here, seemed like he was sort of still learning his way around.