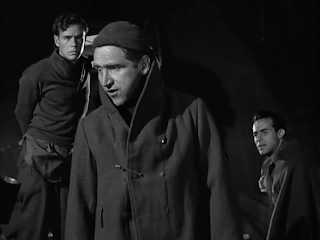 Battleground tells of a group of low level infantry men who seem to be fighting almost aimlessly during the battle of the bulge. Battleground stands as one of the first World War II films to show the soldiers especially unenthusiastic about their position in the war.

James Whitmore's Sgt. Kinnie is the commanding of officer of these group of soldiers. Kinnie relays orders on occasion and fights with the men in the battle. He never joins in with the men in their direct comradeship though because he still is a superior officer even though a low level one. He is seen only briefly from time to time in the film. He at first calls out order and commands his troops, in proper military fashion.

He has the right command, and manages to be noticeable despite the shortness of his performance at times. Every reaction though Whitmore has is completely spot on, he is always completely realistic as Sgt. Kinnie which is exactly what he needs to be. Whitmore makes Kinnie, charming in his own way, but also aware of his duty, and performing. Whitmore shows Kinnie to be a real man, in a very real dangerous situation.

Now the most impressive part of Whitmore's performance is actual the physical aspect of his performance. Kinnie begins in the film with a pure proper military walk and manner, but slowly through the long time in the cold Kinnie slowly begins to physically degrade. Kinnie's degradation is slow, but incredibly realistically handled by Whitmore. Kinnie truly begins to weaken, and Whitmore shows Kinnie hide his pain, but still makes it abundantly clear, especially when he walks at the end of the film. Whitmore shows he has completely lost his military straight up step, and now a very weakened painful stumble, which he tries his best to still meet the demands of his uniform and position. Whitmore genuinely showed a weakened from simply being in the cold for too long. His performance overall a realistic and effective one. A short performance that is not amazing by any means, but Whitmore utilizes every moment it has.

I haven't seen this one yet.