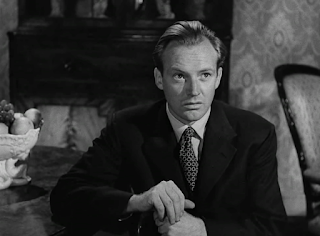 Arthur Kennedy portrays Connie, Midge's (Kirk Douglas) handicapped brother. Kennedy frankly is not given that much to do as Connie, he is always portrayed as following around Midge. Kennedy though still does what a supporting performance is described as and that is he supports Douglas as Midge well. He acts a quiet conscience to Midge. Kennedy is always quietly trying to tell Midge not to do the wrong way, in careful fashion appropriately showing a care for his brother, and trying to help him as much as he can. Connie tries to caution Midge as he falls down his poor path.

Connie is not given much time, but Kennedy always excels in showing his honest want for his brother to do the right thing, in a simple yet moving fashion. His reactions throughout actually hold quite a bit weight from those moments of being the conscience to Midge, but also in the moments of revealing Connie's own feeling to one of the women Midge so quickly disregards. Connie finally stops being quiet as Midge becomes worse and worse. He finally challenges Midge completely and sadly reacts to the fallen Midge. Kennedy always stays honest, and as effective as he can be with his thankless role. When is given the chance he does well, especially in his final scene where he shows his honest love for his brother one last time. It's a strong performance from Kennedy, he isn't often the focus however even off to the side he makes an impact.

My predictions are ruined.

BTW, could you do 2010 Best Actor next? I'm really interested in your thoughts.

I will get to that soon but not right away.