Gary Oldman did not receive an Oscar nomination for portraying Rosencrantz in Rosencrantz And Guildenstern Are Dead. 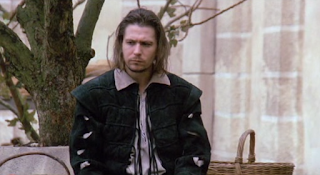 Rosencrantz And Guildenstern Are Dead actually works to a degree just due to the strength of the source material though it suffers by being too close to it for its own good, which isn't too surprising given it is directed by the original playwright. Although it is not a bad film, it is a little bit of a shame as the story could have lent itself to a more dynamic adaptation that played upon tropes of films, rather than of the theater.

A quick note on this review that will be in lieu of Wesley Snipes in New Jack City. A good performance mind you though frustrating stuck within a film that isn't sure whether it wants to be revenge thriller, Scarface, or Boyz N The Hood. Snipes is effective in his role however his charismatic, and surprisingly emotional at times, work is too often diluted by the film that consistently steers away from him to focus on the nearly one dimensional police chasing him. So instead decided to look at a rather different performance from the great Gary Oldman. Although Rosencrantz and Guildenstern as it stands as a slightly adapted film version it at least commands a notable cast, the most important members being the titular duo, of Hamlet fame despite not being the most important in that play either. They take center stage here though purposefully while still staying to the side of the central action of Hamlet. In these "leading" roles the film features two then up and comers of Tim Roth as Guildenstern and of course Oldman as Rosencrantz. I will also mention this is purposefully not a dual review for Roth as well who well isn't bad as the more analytical Guildenstern his performance is perhaps too serious for its own good, and perhaps needed a performer with a natural comedic energy, who would then tone that down.

Now I really mention that as we have Gary Oldman who is not thought of as a comic actor, though in a way some of his more overt performances can be comedic in some sense that is usually not their central purpose. Oldman here though gives a wholly comic approach to the role of Rosencrantz who is far more just in for the ride of the strange journey that the two semi-throwaway characters find themselves in. Oldman finds the right approach within that to essentially make the most out of this strange position that is also detached from the central plot, but rather than burdened by the need for understanding as Guildenstern is that he takes what comes. Oldman plays with this certain idea of the ignorance that is bliss for a rather interesting performance from his oeuvre to begin with. In that Oldman is far more the passive individual in a way, even though he steals the film in his own way, however this is through cleverly low key take that achieves a most successful duality within the character who doesn't stand out in the story yet Oldman makes him stand out within that idea. In Oldman plays Rosencrantz as the extra who essentially has just found out that he is an extra in an ongoing film, and is just trying to work with that.

Oldman is rather delightful in the role in his way of creating this man with this certain eagerness to please in a way that is rather endearing. Oldman defines his Rosencrantz with an earnestness, that will make sense even within the technically duplicitous character as he stands within Hamlet the play, as a fairly simple man trying to deal with a rather complex issue of one's metaphysical nature. Oldman makes that certain bafflement particularly entertaining though by presenting it with such an optimistic spirit within every moment of it. This comes right down to Oldman's frequent delivery of Rosencrantz introducing the pair, often wrongly introducing himself as Guildenstern before being corrected. Oldman delivers this so spiritedly of a man somewhat in the thrall of the idea that there is some bliss to be had of their peculiar state of mind. This attempt to find joy that Oldman brings in every moment is what makes this performance work particularly well, and greatly aids the film which could otherwise get lost in its own pondering, sometimes it does. Oldman brings this sense of always befuddled sense of discovery in the moment that is always rather humorous whether it is Rosencrantz discovering their new geographic location, or the way their coin consistently lands on heads as though they are stuck within time.

Oldman's performance though goes further in every scene in a way to provide very much a bit of a cinematic edge needed to his work which remains dynamic even when just reacting towards whatever it is Rosencrantz is seeing. Oldman never wastes such a moment either to create this sense of confusion over his place in the world, or just an often hilarious moment of Rosencrantz trying to make the most of his odd circumstances through Oldman always optimistic approach to the role. His timing is simply impeccable here to bring humor to every scene, even against Roth's often too dour of an approach. Oldman's physical performance even helps to accentuate the needed humor within it by presenting Rosencrantz physically as not quite right, honestly to be an extra. Oldman nicely plays within the lines, yet still doesn't quite fit in rather splendid way, particularly his almost Stan Laurelesque  way of going to sleep with a sleeping mask, well really a blindfold. This is even right down to when the two come to decide to go along with the plan to kill Hamlet, through a false letter, though for rather different reasons. Oldman presents this determination on Rosencrantz's part one built upon fear, not of any typical action, but rather of concern of the need to take action when the "world" requires them to take action. Oldman once again finds the right comical energy even within the strangeness of the thought by even bringing almost this sweet petulant sadness within his portrayal of concern over it all. Oldman manages to make even Rosencrantz's acceptance of Hamlet's demise okay within the character, by presenting it as just again his way of cheerfully accepting his very strange lot in "life". Oldman gives a terrific performance here as he not only brings to life the stage character, but he does manage to find the right tone within the adaptation as well. His performance bridges certain gaps in a way to give a rather enjoyable turn that finds the wit within the material, but also in a way that never feels burdened by it.

Louis: I'm so glad you reviewed him :)

Ratings & thoughts on the rest of the cast.

Louis: Your rating for Snipes.

Roth - 3(He's not really bad at all in terms of selling the particularly difficult blend of the new Shakespearean so to speak, and certainly conveys the way Guildenstern is trying to decipher everything around him. He kind of gets lost in that to the point that he is nearly one note at times, and just never becomes nearly as effective in his expression as Oldman. Again he's not at all bad, he just doesn't make the role more than it could have been.)

The rest excluding Dreyfus - 2.5(They all serve their limited purpose of less of a specific interpretation of any of the Hamlet characters, but rather a purposefully generic version of them. They do their job, but the point is they are suppose to really rather to the point.)