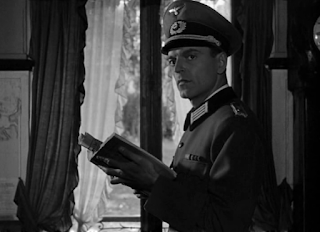 Le Silence de la Mer is an intriguing film about a Nazi officer taking up residency in occupied France with a small French family who refuse to speak to him.

The film takes a unique approach for this story as the French family which consists of a man and his niece almost don't speak a single word in the film. Their thoughts are represented by the narration by the man. The only person we hear actively speaking within the house is the Nazi officer played by Howard Vernon. Now this is interesting in that when we open the film, and first see Vernon's Werner von Ebrennac he could easily be any Nazi from any villain stock room in terms of his appearance. This is not to say Vernon comes out all vile and mean to begin with, he begins the part with a bright smile as the man lets himself into the home of the family, though perhaps with just a bit of coldness as needed to be in his official role. The charming Nazi who reveals his vicious intents though is a common thing though, so one will sympathize with the French family at this early stage. The film continues though and in this Vernon's performance is technically the far less distant one as the family are very static characters, almost just part of the background in a way given that they do not speak. This is even with many scenes between the lieutenant and the family however in these scenes the soldier is the only one who speaks, but he's also the only one who attempts any interaction whatsoever.

After their particularly cold initial interactions the Lieutenant attempts to change it up by only visiting their sitting room in civilian clothes trying to speak to virtues of the French such as which author best represents the French spirit. There still is no real relationship however Vernon's performance is quite effective in portraying this man trying so hard to create one. Vernon beams in almost every moment projecting the enthusiasm of just a man who wants to engage in any conversation it does not need to be even an important one. In his words, and even the way he physically engages with the room itself has the right casual style to it. There's a real warmth within this method of man who essentially just wants to make friends, or at least wants to make some human connection yet the family is wholly resilient as they stay mute. As the one sided conversation continues Vernon portrays well the two sides of the man's interactions in that he keeps a real warmth in the man trying to make a connection, as every word is said as a friend not an invader, while at the same time, Vernon reveals within his eyes the growing bit of desperation and sadness as the result of trying so hard to connect yet seemingly failing to do so.

We are given scenes though with the lieutenant outside of the silent household, although these scenes are pretty sparse in terms of actual dialogue as well. What we do see is the man's connections to his duties as a Nazi in the way he interacts with France itself. In the earlier scenes in terms of speaking on his duties and the way he goes about admiring the conquered landmarks within France, Vernon expresses the attitude of a man proud of his endeavors. Vernon though is careful to portray this with a definite conviction, the conviction of a man who speaks in these grand platitudes, that he firmly believes, yet they are more fitting to a propaganda pamphlet than a wholly genuine experience. In the film though the lieutenant slowly learns of the real intentions of his armies, and again Vernon's reactionary work is essential to the power of the film. As his superiors speak of the intentions of the Nazis to destroy rather than build we see the similair desperation and hesitations as when he takes in the silence of the family. Although Vernon is the main speaker of the film even he does not speak a great deal and the arc of the officer is left often in those silent margins. Vernon finds though changes effectively to reveal slowly a reality dawning within the soldier, and that warmth dissolves in the solider, not that he becomes a hardhearted man, but rather he is moving by revealing a man who has come to understand everything he has known has been a lie. The film leaves on fittingly a silent yet poignant moment where the family interacts with the officer their only time, indirectly, by supporting his choice to leave France due to the Nazi intention. This communication is only through a passage in a book that they set up for the officer read, and Vernon's final reaction is remarkable as he realizes the somberness still of his situation, yet with just a bit of underlying joy of appreciation for the family. Howard Vernon's work, though the least limited in the film, is still fairly limited by the confines of the film's vision. Vernon though still excels well within those confines and is essential in discovering the emotional potency of the story through his humane depiction of a Nazi with a conscience.

Louis: Your Female Top Tens with ratings and other 4+ performances.

Louis: Your thoughts on Roger Ebert and Gene Siskel as a movie critic.

Louis: Thoughts on Mark Kermode and if you've read his reviews, Armond White.

Luke: White is one of the worst critics ever.

Louis: Did you ever share your thoughts on Joe Keery in Stranger Things? Because I've finally accepted that he was my favorite of the cast.

Kermode's an incredibly entertaining critic in the simplistic terms of breaking down a film in a most amusing way. I will say his taste sometimes is far from my own, as he sometimes puts forth dreadful films as great, however you can always tell he is being true to himself when he does this. I would say his tendency as a socially minded critic, and being upfront about it is fine, since it is upfront about it, plus in doing so you know exactly his perspective, even if you don't agree with, so when he smashes a film for its gender politics you know what Kermode is talking about at least in regards to being Kermode, well except with Mad Max Fury Road where he somehow missed what the film was doing there to strange extent. Kermode's logic and perspective is usually consistent but most important for a radio critic he's fun to listen to.

White's existence is as a contrarian not a real critic, in that he's not giving his real thoughts, at least it is very doubtful. There's hard to please critics, but his specific approach to push forward known trash over well praised films gives up his game. As a sideshow this can be mildly entertaining when well done, but even when done well the act gets tiresome quickly.

In Bronson's review for Once Upon a Time in The West

Originally got the Anonymous request, but lost it when breaking up the replies to fit, I'll get the other Irons's scenes and the Siskel and Ebert thoughts again eventually.