Jean-Louis Barrault did not receive an Oscar nomination for portraying Jean-Gaspard Deburau who went by the stage name of "Baptiste" in Children of Paradise. 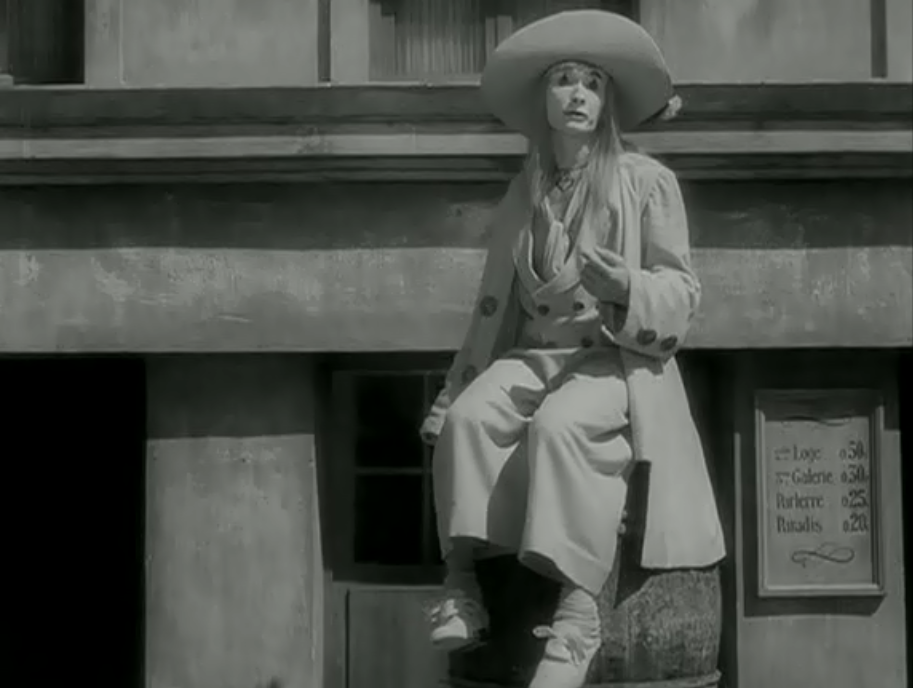 Children of Paradise is a rather wonderful film centered around the theater world in Paris in the early part of the 19th century.

Jean-Louis Barrault in the first half of the film plays one of the promising men of the theater who specializes in pantomime. We are in fact first introduced to Deburau and his character of Baptiste when he casually witnesses a pick pocketing allowing him to exonerate the courtesan Garance (Arletty) through performing an act where he played out the pickpocketing without words. Throughout the film Barrault performs his part of the character that Baptiste plays on stage who is a bit like the Chaplin's tramp which is to say a slightly daffy, slightly silly, but very romantic creation. The film actually spends an ample amount of time in showing Barrault's performance as the recreation of this particular stage persona.

Barrault is incredible in any scene where he performs, especially his opening replication of the pickpocketing, and he never leaves us to question why Baptiste popularity would only grow with time because Barrault makes every moment of his pantomime completely compelling to watch. His movement is a splendid with his style that is almost a dance in its delicacy. Each act he performs has the tinge of comedic timing but in general this great beauty to his performance. There is such a charm in his portrayal of his character. In many of this older films where they would do such acts, sometimes it would feel a bit like filler in the film, but this is not the case here as every time Barrault takes the stage so to speak the film is still completely alive as he realizes the performance side of Baptiste so well and so thoroughly.

Although all of Barrault's scenes of the performance are splendid to behold and you could easily see how that character could carry his own film frankly we do see Deburau as himself from time to time when he is not performing. Barrault is equally great in these scenes as he adjusts himself quite artfully from the performance to the performer. Barrault is still very charming when he is in the everyday life of Deburau but the interesting part of it is that Barrault presents a very different man than the one he plays on stage. It is a different kind of charm that Barrault brings to this side of Deburau as it is much more realistic sort of charisma although still very fitting for an actor such as he. Barrault makes Deburau though most importantly a man opposed to the character he was on stage, and being a man there are far more obvious inadequacies to him.

Barrault makes Deburau a very endearing man as he tries to pursue Garance who he is in love with. Barrault makes Deburau above else an endless romantic again much like his character, but again it is interesting in how he does give the subtle differences in the style of the the man versus that of the character. Barrault shows Deburau's romantic side with a certain fervor and always as something completely genuine in his mind, but unlike when he is Baptiste Barrault does not show it to be a relatively simple emotion to deal with. When Garance gently rebuffs his attempts to romance her it is not just a slight sadness that Barrault portrays which would be fitting for the mime Bapitiste. When Deburau  himself reacts it becomes the much stronger feelings of bitterness that are much more fitting for the Deburau as a real man.

The second half of this two part film Barrault's role is somewhat reduced yet he still makes the appropriate impact whenever he is on screen. He's mime scenes once again are all notable and remarkable to behold, but in terms of Deburau's romantic life the film creates an interesting dynamic around Barrault's performance. Barrault as Deburau still continues to pursue Garance, even though he now is married with a son, as the hopeless romantic anyway. The film plays around Barrault work nicely making his actions questionable by showing what Deburau really is doing while Barrault appropriately portrays a definite selfishness in Deburau by simply continuing his course form earlier, and making it so frankly his romantic attitude just does not seem nearly as charming as it was before.

Jean-Louis Barrault gives two separate great performances that can be observed in this film. It would have been good enough just to witness his fantastic work in creating such an endearing and entertaining mime in his portrayal of Baptiste when he is on screen. Everyone of his mime sequences are very memorable and some of the best moments of this film, but there is indeed more to Barrault performance than that. Barrault is equally effective in portraying the artist behind the art. He brilliantly contrasts the real with the fake well making a fascinating and thorough depiction of both who the man is but also the character that the man creates. This is just a splendid work by Barrault which always succeeds in complementing the atmosphere of the world which surrounds him.

This is indeed a wonderful film, this and The original Beauty and The Beast are jawdropping in my opinion, what did you make to the rest of the cast.

Is it silly to say that I almost fell in love with his character lol.

RatedRStar: Pierre Brasseur was also very good in portraying a very different type actor as well as a romantic.

I'll wait with Herrand. Arletty acting wise I thought was fine enough, but I do feel she was probably too old for the part, or perhaps just was alluring enough that all the men would be enthralled with her.

Matt: Mifune in either High and Low or in Rashomon.

This review got me so excited, I reeeeeeeeeally hope he wins the year. Also that comment about Herrand gives me the impression you're going to review him, which is equally exciting because he's my supporting actor win.

The performance isn't 5 material (at least to me), but Aldo Fabrizi's performance in Rome, Open City is watch-worthy, as is the film itself.

As for Brasseur, I've been wanting to see it for quite some time so now I'll just need to make a more concerted effort to see it.

I actually personally think that the performance that stood out for me in Rome, Open City, at least in terms of impact was Marcello Pagliero as the ill fated resistance fighter.

Well I was going to recommend him for supporting whereas Fabrizi is lead.

Louis: What are your final predictions for the 86th academy awards.

Picture: 12 Years a Slave (Although Gravity could just as easily happen)

Supporting Actress: Nyong'o (Although it could just as easily be Lawrence)

Original: Her (Very tempted to put Hustle here instead)