Alternate Best Supporting Actor 1970: Leonard Frey in The Boys in the Band

Leonard Frey did not receive an Oscar nomination for portraying Harold in The Boys in the Band. 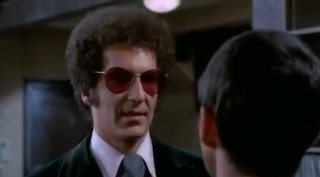 The Boys in the Band is a film about a group of homosexual friends who get together for a birthday party although problems arise when their various past traumas are revealed and one of the men invites his old straight roommate. Although the film is well enough written and directed it is problematic because of the performances of the cast.

The actors in this film are reprising their stage roles and the majority of them are making their film debuts. This unfortunately is more than a little noticeable in their performances as most of them seem to be playing to the back rows. The film wants to make it doubly clear, in case you did not know already that the characters are definitely all gay. The performances may even well fit with the flamboyant characters but the actors often falter with the more subtle moments required of their characters. Leonard Frey did not make his film debut here though, but he too certainly gives a less than subtle way of delivery his lines. His voice here sounds like a more nasal version of the voice that Al Pacino used in Dog Day Afternoon.

Frey appears well into the film although he build up quite a lot as it is his birthday. His entrance is quite dramatic, and suggests that Harold will not necessarily be bringing cheer to the proceedings. Harold, like the main character Michael (Kenneth Nelson), has a strong passive aggressive streak that only becomes more openly aggressive as the night proceeds. Although the voice Frey uses is less than subtle, much like most everyone else, but unlike most of them Frey does know to bring some subtext to within this flamboyance rather than trying just when they are asked to be less loud by the script. Frey, because he seems to understand film the most, gives by far the best performance in the film.

Harold is a bile filled man ready to take on Michael's bile with great stride. The main difference between the two is that Harold is far more comfortable not only as a homosexual but as well in his sardonic style. Frey is very effective in creating a loathing pessimist who seems to find solace in whatever way he can trade offenses with Michael who happens to be in particularly bad mood. Frey is very good in the most surface side of his character which is making every verbal swipe toward Michael with the utmost precision. It is rather interesting to see the man who played the shy Motol in Fiddler on the Roof play the role of a vicious cynic with such ease and even some menace.

Frey makes Harold more than just a set of zingers to hit Michael with through the course of his visit. Frey, unlike most everyone else, makes great use of his silent moments during the film. Frey in these moments suggests that his cynicism is not all there is to Harold. There is a certain sadness Frey suggests in his quiet moments and in his reactions to Michael's antics that slowly seek to make everyone as miserable as he is. Frey largely steals these scenes by showing that as Michael harasses the others Harold is slowly building up his own distaste and in turn his own case against Michael. When Harold finally cuts Michael down Frey absolutely earns the moment by building to it properly and delivering with the cold ferocity necessary.

The only problem I would have with Frey's performance is his voice that he uses that does always feel like a straight carry over from the stage without proper adjustment for it to seem wholly natural. It still does feel more of an actor's choice than something entirely natural to his character. Other than that choice though Frey's gives a strong performance that easily bests everyone else in the cast by bringing more to his character than some obvious mannerisms or absurdly labored line readings. If it were not for my one major reservation of his choice in voice I would say this is very close to being a great performance by Leonard Frey, as he very much delivers in his portrayal jaded man who gets the most pleasure in his life by punishing a man who just is not nearly as good at being jaded.

Has anyone seen Spring Breakers, if so what were your thoughts on James Franco

I thought Francos performance was certainly interesting and occasionally entertaining in an oddball way, but there wasnt much to his character.

Ive been in a Disney mood today, so playing Kingdom Hearts and watching some underated classics.

I noticed Louis that your favorite film was Ichabod and Mr Toad, I really liked it, I thought the Sleepy Hollow segment was perfect (especially the horseman), what other Disney films did you enjoy Louis?

The Great Mouse Detective has always been one of my favorites.

I always think that TGMD was very underated, I always had a soft spot for Robin Hood lol, I always thought it was charming.

Louis: What are your thoughts on The Little Mermaid, Beauty and the Beast, Aladdin & The Lion King.

My personal top 5 favourite Disney films. Some that I've not listed are better films, but as a child, liked these the more:

I've never actually watched the Little Mermaid all the way through, but as for the rest I like them all well enough but I've always preferred classic Disney. Mainly I'm not much of a fan of the way they did comic relief in those films, although I do think Robin Williams's performance works in Aladdin.

What about Lady and The Tramp =).