Alternate Best Actor 1970: Gian Maria Volontè in Investigation of a Citizen Above Suspicion

Gian Maria Volontè did not receive an Oscar nomination for portraying the police inspector in Investigation of a Citizen Above Suspicion. 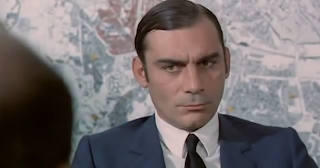 Investigation of a Citizen Above Suspicion is an entertaining film where the title is pretty self explanatory.

For most of the film it is hard to get a beat on the work of Gian Maria Volontè in this film. Volontè plays the titular citizen and when we first meet him he goes and murders a woman. Afterwards he sets up the crime scene in elaborate fashion then it appears he will be the one who is in charge of the investigation of this murder. Volontè's performance seems quite random throughout the film, and really the most consistent thing about him is the way he walks. He always has the walk of an official government agent every step he makes seems to be very particularly yet with a certain casual style to it emphasizing that in his position he does not need to rush doing anything. Now past the walk Volontè seems to take a rather random approach.

One scene Volontè will play the part as you would if the film was a straight less satirical picture as the apparently determined government man. Volontè is very good at the serious looks and showing the extreme importance of job. He is able to seem as though he really is doing his job as he commands everyone around him to do their duties thoroughly. Volontè, as shown in his Sergio Leone directed performances as well, carries a naturally menace with him so well. The way he leans on any particular witness or even one of his underlings is very effectively handled by Volontè. The inspector does not need to really say anything he only needs to indicate his position and give a look because of the ease of Volontè's intensity.

Of course without much notice Volontè can go off an erratic deep end as he seems genuinely insane as the inspector. The inspector unsuspectingly goes from intimidating those to be silent, to seemingly making it so evidence will be found that he is guilty quite randomly. There seems to be no method to his madness and the same can be said for Volontè's performance. He goes off the deep end without warning and this deep end can be a series of different deep ends. Sometimes Volontè plays the cold cunning killer creating witnesses, sometimes he is just off the wall in every way, sometimes he just seems to be doing it for the fun of it and is enjoying every moment of it. Volontè is never consistent with his portrayal, although he is most entertaining throughout.

I was not sure what to make of Volontè's work until it all came together in his final scene of the film where the inspector openly pleads his guilt to his associates who refuses to accept such guilt. Volontè's scene shows a break down to just a pathetic mess who wants to punished for what the has done wrong. The way Volontè plays this scene unlocks the secret of his character which is that he is just a child, a child who has been playing a game and finally wants to get punished for what he does wrong. Volontè brilliantly shows no maturity in the moment as he just pleads basically to be recognized that he is capable of wrong. It is not really regret that Volontè suggests for his crime, but rather he acts as though the inspector is a spoiled kid wanting some recognition of his behavior.

This is a most interesting performance by Volontè as he manages to create the mystery of the film, why the inspector killed the woman at the beginning, through his portrayal of the inspector. Volontè keeps you guessing what exactly is going on in the inspector's mind through his constantly changing method which always remains very watchable and enjoyable. I will admit I was not ready to get behind Volontè's performance until his last scene as he is pretty scatter shot in the way he plays the part, and it is hard to know what he is going for much of the film. Volontè completely nails that ending though, and in doing so he gives logic not only to his entire performance, but as well to the film as a whole.


On a unrelated note, I can remember when most people on this blog were angry in 2011, when Michael Fassbender was not nominated for Shame, it looks like he will finally be nominated this year, imagine if Fassbender had never been nominated ever, thankfully it didnt much longer for him to get back in the oscar race, I know people use the whole next Daniel Day Lewis/ Marlon Brando card, but if there is an actor who can be the best in the world, I think its Michael Fassbender who could take that position.

Theres an actor that I miss seeing on this blog, I wonder if John Hustons legendary father will ever make a reappearance since he was one of the all time greats.

Off Subject Louis , but would you consider Johnny Depp in Edward Scissorhands and Mac Culkin in Home alone for 1990 lead?

Louis. what ratings would you give to cillian murphy's performances in Batman Begins & inception

Depp and Culkin will certainly be considered.

4 for Batman Begins and 4.5 for Inception.

What were your impressions on Smaug the dragon in The Hobbit:DOS

Also what were your thoughts on a whole for Inception

Seen 12 years a slave, 3 days ago, Incredible and I feel Michael Fassbender's performance is being underappreciated by many.

Smaug was a pretty great villain even if the fight against him went on a little longer then it needed to.

I would say in exploring the world of both dreams, and a world where you can invade dreams Inception falls short in terms of ambition, but as a thriller it is very effective.

In regards to Fassbender, I would agree.

Louis, after you finish your alternative years, what do you intend to do next

Not sure to be honest.

Haven't seen Nebraska, or Wolf of Wall Street (although I'll be watching it relatively soon). I rather liked Dallas Buyers Club.