Robert Prosky did not receive an Oscar nomination for portraying Leo in Thief. 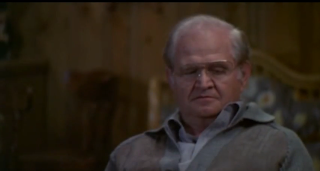 Thief  is about a career thief Frank (James Caan) who agrees to work for the mafia while trying to build a more normal life for himself. It's a pretty effective thriller although I found its score to be rather poor, I like a good 80's synth soundtrack, but here it was distracting and often felt out of place.

Thief follows many similar story beats to that of Drive, and one of the similarities is found in the main heavy of the story who is a older mobster, although Bernie Rose as played by Albert Brooks in Drive seemed a bit more retired than Leo played by Robert Prosky. Both men approach our hero with a good proposition. Bernie Rose wanted to get into the racing scene circuit with the driver, but Leo here actually wants Frank to perform illegal activities for him. Frank, despite ticking off one of Leo's men, intrigues Leo with his skills as a thief which makes Leo offer Frank an offer that it seems he can't refuse. The offer being that Leo will basically fund and set up jobs for Frank to pull and they will split the profits.

Robert Prosky, much like Albert Brooks, is not exactly the first guy you think of when you think villian after all Robert Prosky was the man who originated the part of the hapless salesman Shelley Levene in Glengarry Glen Ross. That is not a problem for Prosky in fact it is asset in the way he plays Leo for the first three fourths of the film. Prosky plays Leo as a fairly genial fellow when Leo outsets his plan for Frank and himself. Prosky is rather gentle as Leo asks Frank do to jobs with him with a nice friendly smile, and at the moment Prosky makes it seem that Leo can be perfectly trusted as mostly just a nice old man. Prosky makes it wholly believable why Frank would except the proposition because Prosky makes it seem like such a good deal.

Prosky does something brilliant here though in that even though he makes Leo seem like a nice old man he never compromises the fact that he also is a gangster. Prosky approach to do this lies almost entirely in his manner that suggests his years as a mobster. The way he walks, the way he seems to always be in control of his crew without anything all comes Prosky's body language as Leo. Prosky even brings this incredible hidden menace in Leo, it is something just suggested never enforced in the early scenes. It is obvious that Leo had a long past in crime and Prosky let's that known in his physical performance, and puts it to just simmer there below of the surface of the personality that Leo allows Frank to see.

One particularly amazing scene for Prosky comes when he is talking to Frank and Frank tells Leo his personal problems which involve issues with adopting a child. Prosky plays this scene so well in the add but oh so effective dynamic he brings to the part of Leo. On one hand Prosky genuinely makes Leo a father figure to Frank, as Leo tries to remedy any problems he might have in his personal life. Prosky seems so honestly warm as Leo promises to get Frank that son he wants. Prosky makes Leo seem man who just wants Frank to have a good life, but there is something else in the scene that only adds to the greatness of it.  During the entire scene Prosky keeps Leo the gangster though in the way he leans in his chair, as if he were a King, and even just the way he wears his sunglasses that are so fitting to an illegal power player.

Leo undergoes a bit of a transition though when Frank wants to end the agreement and Leo does not. This is flawlessly portrayed by Prosky, aided well by the way he set up Leo throughout, as in a single facial transition we see the real Leo come out. It is a beautifully done scene by Prosky as we see the happy hold man, when Frank has said nothing, drift to the murderous criminal right before our eyes when Frank tries to threaten Leo. Prosky does not need to say a single thing as it it obvious the tide will change as makes pleasantness naturally drift from his face to that of the hollow mobster he really is. The full extent of the evil in Leo though comes in Prosky's strongest scene as Leo threatens Frank in one long monologue. Prosky is absolutely chilling in the sheer brutality he brings to Leo's words that does not only threaten Frank but threatens his entire family.

The strength of that monologue is made all the more powerful because of how Prosky lead to it. In the monologue there is not a hint of sympathy in his eyes, in his voice, in his face. In the moment Prosky let's be known that the warmth before was only allowed to men who followed every order he gave. The monologue is truly jarring because all that warmth is made to be a lie by Prosky showing that Leo never was really Frank's friend, not even when he found Frank a son. This is a great performance by Robert Prosky who steals every one of his scenes as well as the entire film through his outstanding portrayal of the method of an aged gangster. Prosky never allows you to second guess his casting for a moment through his imposing depiction of both the kind deception and the true viciousness of his character.

This sounds like one of my favourite kind of villains. The kind where they seem calm and even sort of charming on the outside, but you can see murder RIGHT behind their eyes. Albert Brooks did it, as you said, so did Christoph Waltz in Inglourious Basterds, and, in my opinion, Donald Sutherland did a really great job with that in Catching Fire.

Hey Louis, what do you think of Michael Mann in general?

He is one of my favourite directors, and his crime films are always great, like heat and collateral, and I also think he is very underrated

I find him to be a pretty solid director usually.

I haven't seen this movie, but it does look like something I'd like. Granted I'm not big on Mann in general save for The Insider. It thought Heat was bafflingly overrated with nothing of real interest and Collateral interesting but hollow. Then there's stuff like Public Enemies that sound great on paper but are dull in execution.

That scene where Leo turns from Dr. Jekyll to Mr. Hyde was astounding. I'd probably seen Prosky as a character actor several times before, but this performance made me remember his name and face permanently.