Fredric March did not receive an Oscar nomination, despite being nominated for a Golden Globe, for portraying President Jordan Lyman in Seven Days in May. 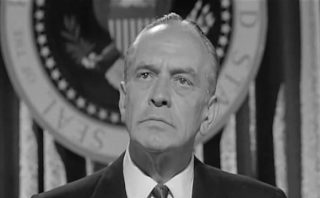 1964 in film could be described as the year of the London set musical, or maybe the year where Bruce Dern is brutally murdered, but I would call it the year of the President of the United States. There was Fred MacMurray being the husband of the first Female President, there was presidential hopefuls vying for favor of a former president, there was two presidents negotiating with the enemy to avoid mutual destruction, and there is the president of this film who must avoid being overthrown by a coup d'état lead by a General Scott (Burt Lancaster). Fredric March had some trouble adapting after his earlier days during the Golden Age of Hollywood. In films like Inherit the Wind and Death of a Salesman March seemed out of his element giving performances where he overacted wildly, that is not the case here which was one of his final performances.

Fredric March plays the President Jordan Lyman who is not a very popular guy as no one seems to like him, but he is a man who stands by his convictions doing what he thinks is right even if many people think otherwise. March has the most difficult role actually because he has to make the President compelling even though Lyman stands by what he believes through the film. Kirk Douglas gets to show the conflict of loyalties, Lancaster is straight forward but gets to be a vicious villain, Edmond O'Brien stays on the same side but hey he gets to be a sweaty drunkard, this leave March to be man standing his ground firmly and it is amazing because March actually steals the film. March wipes the slate clean of some his other late period performance with his very assured performance here.

March is excellent because he basically goes about showing all the complexities there are within a man who is so convicted in terms of his personal beliefs. March brings the right type of dignity to his role, a natural dignity. He never glorifies the President as a Saint like man, but shows him to be simply an honest statesman. March makes it believable that he would be such a good man, but as well would be a man that so many other people could hate. March is great in his early scenes as he explains his reasons for standing by his position no matter what. There is not a hint of sanctimony in anything that March says and he brings a naturalism to all of the Lyman's points. March never gives speeches to anyone, other than his actual speech at the end, he just makes Lyman a real man just trying to do what he thinks is best.

March really makes himself stand out though because he always brings more than just conviction to the part of President Lyman. March actually nicely brings some doubt in Lyman. This is never something that overwhelms the portrayal but March brings it in nicely though to flesh out Lyman. By bringing these slight hesitations in his performance March humanizes Lyman very effectively as he shows the mind of an actual president who has to think about too many things at too many times. Importantly March never makes as if Lyman is really doubts about what he believes, but rather doubts in regards due to the way so many around him are look at his desires for peace. There is an underlying fear March suggests, not fear of war, but a fear in Lyman over an apparent hysteria gripping the people.

President Lyman, despite his unpopularity, is no fool and takes it very seriously when he hears about the possible coup which brings out the strategist in the man. March is terrific in his scenes of showing how Lyman plays the game against General Scott and how he mediates his own room of allies. March stays unassuming to a certain point but always suggests a intelligence in the man. March is very good because as the other men say their peace he always has Lyman reasoning and deciphering what they are saying in an attempt to get to the bottom of it and make his next move. March never makes Lyman a machine though and one of his best moments is when one of his close aids have died. March is very moving as he shows that it really does hit him hard, but he can't do anything other than continue working to stop the coup.

The real test of March comes down to his confrontation scene with Lancaster. March has to go toe to toe with Lancaster and make it so we the audience believe that Lyman wins against the argument, and Lancaster is not pitching softballs. March not only stands his ground in the scene he actually overtakes Lancaster with the tremendous drive he brings with his performance. Every single line March delivers like a bullet at Lancaster. Every word he has March finds the passion behind it, and leaves no one to question who wins the day when the General leaves the room. I just love seeing March really give it his all with his performance and never once indulging in overacting as he very easily could have. Fredric March gives a great performance, giving the greatest presidential performance of 1964, and I would argue his personal best as an actor.

you should see him on his appearance Whats My Line lol =D he is possibly the funniest guest.

It's funny that you mention that as I was actually thinking about writing at the end of this review "his best performance other than his appearance on What's My Line". He's riot on that.


I saw Zulu recently (me being a brit it is almost in my blood lol) and the one scene that got me, was when you hear like the Zulu noises as something was coming over the hill for the first time with everybody else just staring, really quite suspenseful lol =D.

I always wondered why people like Marlon Brando and Richard Burton were never on Whats My Line cause I would have loved to see that lol.

When I chose Michael Caine as my request, it was really because I was sort of at a loss for whom to request. That's fixed now for any future requests.

As for the film itself, I just absolutely love it. The way it treated the Zulu was so groundbreaking and human. I know that sounds weird since not one of them was ever singled out, but the film never made them out to be animals. The war dances they did on the hills and everything were shown as something actually done, not as some white-supremacist mockery. It was really refreshing. Not just that, but the whole film is just terrific. I find British colonialism fascinating (both the positive and negative aspects), especially in South Africa and India, so I just absolutely love Zulu and Breaker Morant.

From what I've seen of What's My Line, it seems quite entertaining. I know this isn't really the same thing at all, but Richard Burton's interview with Dick Cavett shortly before Burton's death is excellent.

RatedRStar: James Mason on Password now there was discomfort. For some reason both contestants thought that it was good luck to pat James Mason very hard whenever they won.

Michael: Well I certainly did not mind the request since it gave me an excuse to watch Zulu again, which is one of my favorite films.

Louis, at some point it would be cool if you gave us your Top 100 movies of all time, if you have such a list. And then your 10 favorite movies if that list is any different.

@Louis: OMG Mason looked so annoyed lol I believe he was against Jane Fonda or summat lol and she was crap lol.

Louis, what ratings would you give separately to Lloyd & christensen's performances in Star Wars Ep's I, II, III.
Also what were your thoughts on Man of Steel and Star Trek: Into Darkness

^ I'd give Christensen 5 Wiseaus. I find that particular performance unintentionally hysterical.

I'll be fair and give him 0.5, mainly with the huge flaws of the script and green screen

Anonymous: All three performances would receive ones only because I don't go any lower than that other than the treasured Wiseau of course, but I don't think they are quite worthy of that.

I see that you didn't rank Ewan mcgregor's performance in Ep.III, If you had ranked him, what would his rating be

Probably a 2.5 because he does try, but he can't escape the black hole that is Lucas's script.

Louis, What did you think of Cumberbatch in Star Trek: Into Darkness.

In regards to Man of Steel and Star Trek, I enjoyed the both, but they both had plenty of noticeable flaws as well.

Anonymous: I thought he was fine villain, but not a great one.

@Louis: Agreed on McGregor. I've never felt so sorry for an actor in a bad movie before him. He looked so uncomfortable with the script, his co-stars, the green screen. It's obvious that no loophole in the world would let him out of that contract.

Lastly, What rating would you give russell crowe in Master and Commander, I keep thinking you would give him a 4.5

That is what I would give him.

Once again, Thanks, Followed your blog for the last 4 years and your reviews have been real eye openers for me

Screen Actors Guild announced, im glad Barkhad Abdi is nominated, im extremely happy that Daniel Bruhl is nominated for Rush, and Michael Fassbender yayy, the only nomination im not pleased with is Whittaker for the Butler, lets hope someone else takes his spot come Oscar time.

RatedRStar: The lineup for lead actor is looking like it could be one of the best ever as long as Whitaker is replaced.

Supporting also sounds like it will be great as well with Fassbender, Abdi, and Leto (who I still haven't seen but since I've heard him compared to Hurt in Kiss of the Spider Woman I have very high hopes) likely to be there.

Louis, how many of the probable Best Actor nominees have you seen?

Wow Jared Letos performance similar to my favourite ever lead performance in William Hurt for KOTSW, I hope so =D.

There's not quite as much depth to Leto's performance as there was to Hurt's (which is mostly just because Leto is supporting) but Leto is very likable, VERY believable, and brings a huge amount of emotional weight to his character.

Michael: I honestly can't believe those adjectives are being used to describe a Jared Leto performance. I'm very curious to see this, if only for him and McConaughey.