Tsutomu Yamazaki did not receive an Oscar nomination for portraying Takeda Nobukado in Kagemusha. 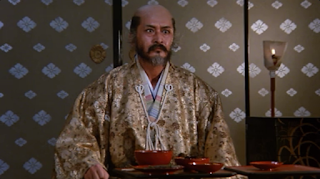 Akira Kurosawa is a director who has his own style and you know its a Kurosawa picture when your watching it. Although it is very easy to argue that most if not all his films are director's pictures, yet he is always able to allow at least one performance to truly shine something that cannot be said about many director's films. I mention this because Tsutomu Yamazaki's performance is something in this film that could have completely have been overshadowed by what Kurosawa is doing with the character. Yamazaki in some scenes is almost indistinguishable, in term of appearance, from Tatsuya Nakadai in his duel role. The reason though is that Yamazaki here plays the brother of the warlord that Nakadai plays Takeda Shingen who at times acted as the lord's double before the even better Kagemusha was found.

Yamazaki, as he did so well in High and Low as well, is able to work within Kurosawa's direction marvelously and never lets himself be enveloped by it. You could argue that Yamazaki role actually might not be the third most important role past those plays by Nakadai, but Yamazaki's portrayal of Nobukado takes his place as the best supporting character either way. Just like his role in High and Low Yamazaki manages rip right into scenes even when his character is at somewhat of distance. Like the opening scene which is a great showcase for both Yamazaki and Nakadai as Kagemusha, Shingen and Nobukado all together in a single scene. Yamazaki is almost a dead ringer in this scene yet he still establishes his own character right as Nakadai is establishing both of his.

Yamazaki finds the right character for Nobukado that has elements of Nakadai's Shingen but is his own man as well. Yamazaki as did Nikadai convey a certain cunning in his portrayal that feels entirely natural as well as makes it believable that this man would try such a ruse. Yamazaki in his smile suggests an assured intelligent fellow, but it is not exactly the same as Nakadai portrayed it. Yamazaki shows something different in Nubukado which is that there is not the weight of responsibility in this man. Yamazaki is lighter in his approach and portrays a different style in this man who is merely trying to help his brother become the ruler of  a country rather than trying to become the ruler of a country himself.

Yamazaki dispersal for awhile until the death of the warlord and the generals of Shingen gather to decide what must be done. The strength of Yamazaki performance really comes through in these scenes because the other actors ill define their characters and for the most part they just kind of fade together in their scenes. Yamazaki is the only one who stands out among them. Where the other men seem more angry than anything else as they are trying Kagemusha to take up the role of Shingen, Yamazaki though brings much more weight through his more somber approach. Although it is not said through his quiet passion and underlying sadness Yamazaki conveys the idea that without the Kagemusha they will lose everything that his brother fighting for making his death the end of the clan.

Honestly without the depth of feeling that Yamazaki gives the death you would almost think his death was meaningless. Yamazaki brings the point home though and as well makes it far more believable that Kagemusha would actually take on the duty. After Kagemusha accepts to pretend to be the lord Nobukado becomes basically his mentor as he tries to teach him the ways of the lord as well as keep him in line at the same time. Yamazaki is great in his scenes with Nakadai as he acts the part of the teacher with Nobukado telling Kagemusha everything he can so he can perform the task. Yamazaki importantly as he does this in a most forceful fashion also has a bit of a nostalgia in his delivery and again he properly shows that the loss of the lord certainly means something particularly to Nobukado.

Yamazaki as with his earlier work makes the most of even the slightest of motions and even something as simply as looking at one of the lord's old rooms can be something special. It would be simple enough just to show the room off quickly and to the point. Yamazaki is still relatively fast about it but he stops for a moment and looks at the room reflecting on the past. Yamazaki does not shed a tear in his portrayal but just his physical manner in this slight action does portray the heartbreak in Nobukado from the death of his brother. There is another element as he tells the trade and that is Nobukado is also thinking about when he was the lord's double. In just a short speech Yamazaki suggests Nobukado's own difficultly with the task as well as indicates some of the problems Kagemusha will face.

Not all is serious though and he actually has some great comedic moments in his performance in the scenes where Nobukado is keeping Kagemusha in check. The two have some terrific chemistry together as they trade various stares. Yamazaki is fantastic in his reactions whether it is enjoying seeing the man he trained perform, or somewhat taken aback when Kagemusha makes an unusual move. One of my favorite particular scenes is when Kagemusha meets Shingen's mistresses and makes a joke saying he is not the real lord. Yamazaki is very amusing as he starts with an intense expression at Kagemusha for risking the ruse, but then changes it into a face of distinct pleasure as he punishes him by denying Kagemusha both of the lord's mistresses.

Yamazaki's performance is a perfect supporting performance and just like the last time I reviewed him he seems to be the go to man for making the most out of very little. Nobukado ceratinly could have been very little and Nakadai's work could have easily been the only performance that stood out. Yamazaki again refuses to be forgotten even when he is in the background and gives a great performance that complements and amplifies Nakadai's performance. He consistently adds more to Nakadai's work because he is always there showing a former double empathizing with the new one. His last scene is particularly strong as Nobukado almost mourns Kagemusha as he knows what his fate will be. Yamazaki's delivery is powerful in the bleakness he creates and once again makes that connection that Nobukado feels with Kagemusha's plight come to fruition.

It's worth noting that Yamazaki won a couple of Japanese film awards, so his performance was at least appreciated on the film's home turf.

ye that is true he is quite a popular actor in Japan, you might like him a lot in Departures which I have heard a lot of praise for. =D, so, does this make you a fan of him Louis =).

JamDenTel: That's good to hear, its a shame that Yamazaki, Shimura, Mifune and Nakadai never could get much awards traction outside of Japan.

RatedRStar: Well High and Low already made me a fan, but this definitely helps.

Some other Yamazaki performances that received recognition from years you've already reviewed are:
Actor:
The Funeral (1984)
Farewell to the Ark (1984)

Michael: Yeah I intend to try to track down more of Yamazaki.