Leon Vitali did not receive an Oscar nomination for portraying Lord Bullingdon in Barry Lyndon. 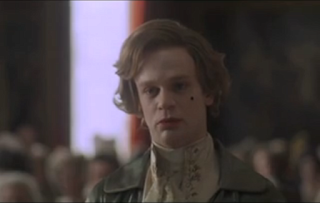 Barry Lyndon tells the misadventures of a Irishman who attempts to move up the social latter during the 18th Century. It has plenty of great moments, but it is held back considerably by Ryan O'Neal's inadequate performance in the titular role.

Stanley Kubrick is known for his clinical nature as a director and is never afraid to make a detached film. This film certainly is one of his coldest and most of the performances in this film match that style. O'Neal perhaps was not suppose to match the style but being so bland he ends up doing so. Leon Vitali though gives the most emotional performance in the film at least in an extroverted fashion. He plays the son of the wealthy aristocrat whom Barry marries Lady Lyndon, and Lord Bullingdon as he is known does not care very much for his step father who he sees as a lowly opportunist and usurper.

Vitali actually does not appear until late in the film as the older version of the Lady's son. Vitali makes him someone who appears to always be off on the wrong foot, and he does make an impression despite his late appearance because his character marks a shift in style. It is not that Vitali's performance seems out of place, but it is very notable due to the intensity of his performance which differs greatly from the rest of the cast. He plays Bullingdon as immensely juvenile whose emotions certainly play first with him making it so he will not think twice about infuriating his step father, and is willing to make big scenes about his hatred for both his Barry and what his mother has done.

Vitali mixes rather well the pompousness that one would except from a spoiled brat as Bullingdon is, yet he does manages to elicit sympathy as well. On one hand he does play up his background and emphasizes well the stiff upper lip of the Lord. He expresses just the great bile the Lord feels of being put in such a place, and is rather effective in just the amount of hatred he espouses getting across just how much he can't stand what Barry has done to him. His performances works particularly well because he doesn't do it in a villainous fashion instead the hatred seems to be entirely an emotional response from being stripped of his place by Barry who he views as the lowest of the low.

Vitali although fully pompous in his performance does allow us to feel a little sorry for him as he is correct in his statements that Barry is an opportunist. Yes he shrill, but Vitali also plays him as entirely genuine in terms of where this comes from. Yes he may be a pompous twit but the harm that Barry has caused him is portrayed honestly, even if it becomes overblown due to his background.Vitali's much emotional approach is effective particularly in the scene where he and Barry duel. Vitali allows the scene to really work as he reflects realistic reactions to what occurs during the duel whether it be fear as he awaits Barry's shot, or the unbridled joy when he knows he managed to shoot Barry.

Leon Vitali performance here is a nice addition to the film as he succeeds in being quite different from the rest of the cast without seeming like he is in the wrong movie either. This is a good performance by Vitali although a little too limited for me to quite say it is a great one. Bullingdon is not given a great deal to do and his exit from the film is fairly brief leaving only a quick moment where he silently shows a more confidant Bullingdon which is handled well, but does not really give him that much of a chance to explore the character any further. Vitali does come in at the right moment though and infuses the right type of life into Barry Lyndon at the right time with his emotional portrayal of Lord Bullingdon.

I would have at least given him a 4.5. He really stole the movie for me. I also would argue you're not giving O'Neal enough credit. The character of Barry Lyndon was intended to be a cold, somewhat calculating man, and O'Neal played him as such.

He was really lacking for me, I did not feel the ambition in his character in any way. I know Kubrick basically had to use O'Neal to get funding but I think Terence Stamp would have been perfect for that role.