Alec Guinness did not receive an Oscar nomination for portraying Fagin in Oliver Twist. 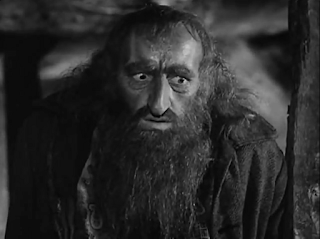 This is a well made film version of Dicken's novel about the child orphan taken in by a ring of pick pockets.

This version received no Oscar nominations despite that the academy later gave a best picture win and a best actor nomination to the 1968 musical version. The best actor nomination went to Ron Moody for his version of Fagin, but the academy perhaps should have retroactively given an Oscar nomination to Guinness though as Moody clearly takes quite a bit of inspiration from Guinness's performance. There are differences though as Moody's role is considerably larger with his solo musical numbers and all as well as the musical version of Fagin is a much more lighthearted sort of fellow.

What Moody did take from Guinness is the physical and vocal manner in which he uses in the part. Moody's voice is very similar in that grumbled growl that Fagin has, and his hunched over manner of walking is almost the same. The only major difference in between them is that Moody is much more flamboyant in his method with all his dancing and such that he does, and Guinness goes for a much more down to earth sort of Fagin. That approach though is where the strength lies in Guinness's portrayal of the character who he tries to make a man of the Victorian London even if he is a most peculiar sort of man.

As shown a year later in Kind Hearts and Coronets Guinness is a master of playing roles that are suppose to much older than he is. Honestly if I did know this was Guinness I would not have known Alec Guinness was even in the film considering how much he fades into the role. It is not just the make up either, his voice, his posture and his whole style is entirely something else that suggests both the age and life of the old quirky criminal Fagin. Whenever he was on screen I did not see Alec Guinness playing the part I merely saw the character that Charles Dickens had written right there on the screen.

Guinness is terrific in all of his scenes he has with Fagin really creating a character that enlivens the film marvelously. Guinness is great because he able to show both the age of the character while still bringing a great deal of energy to the part. Guinness is very entertaining in the scene where he shows off how to pick pocket to Oliver, and even though he doesn't have "Gotta Pick a Pocket or Two" to sing to while he does it Guinness is actually just as enjoyable as Moody in the same scene. He keeps the right tone showing Fagin playing up a little because he is doing for a child, but Guinness always stays very believable in this Fagin never going too far with him while staying eccentric.

Where Guinness really diverges from Moody though is playing the true nature of Fagin. Where Moody's was a lovable old coot who just happened to be a criminal, Guinness's Fagin is considerably more complex. Guinness's is very good in finding a balancing between the savory and the darker aspects of his character. Guinness is great in his one early scene alone with Oliver as he comes off as genuinely sweet and with some warmth there. Although he still seems far from perfect Guinness does suggest some honest affection in the old man toward the young boy, and his delivery of his fatherly "wisdom" is earnest and makes Fagin quite likable actually.

Guinness successfully shows that Fagin is a worse criminal than his nicer qualities might suggest. Guinness is very effective as he portrays the grim side to the character. He conveys the eyes of a man with desperation as well as the possibility of a great evil in the man. Guinness is able to be just as conniving as he was gentle in his earlier scenes. He brings out the villainous role well showing it all still in Fagin's eccentric style but with a certain vile touch to it all. Guinness is excellent because he is able to merge both aspects of the man into a believable whole. The sides of the man might seem contradictory in nature but Guinness allows each to side of him to flow naturally with the other.

The only unfortunate thing about Guinness's Fagin is that he is supporting. He takes a while to appear in the film and he really does not have that many scenes to himself unlike the later musical rendition. I wish he had actually had more time and less to Robert Newton as Bill Sykes who can't hold a candle to Oliver Reed's portrayal of the character. Guinness in his limited screen time though creates an intriguing character with his Fagin. Guinness becomes the role and brings the character of the novel to screen in his own way that. Guinness is able to realize Fagin as character bringing out the complexities of the role and never just riding on the flamboyance of the character as a lesser actor very well might have.

Dangit, I think my predictions were wrong, very wrong indeed. I'd say Guinness will win, followed by Robinson then Stewart. I also think Barrymore with take the 4th position.

Anyway, great write up. I've yet to see this performance by Guinness, but I'm sure it's just as great and excellent as you say. He was just the consummate actor. I wish his miniseries of Tinker, Tailor, Soldier, Spy and Smiley's People had been films; he is so utterly fantastic in them, just as he is in everything. He somehow elevates his material, no matter the quality, though he did seem to have the gift of picking at least average to slightly above average material at worst.

Yeah, he's probably my favorite actor from that era. I actually think his work in Bridge is my favorite Best Actor winner the Oscars produced. (Favorite Supporting Actor winner is Landau. Not even close.)