Jean Louis Trintignant did not receive an Oscar nomination for portraying Georges Laurent in Amour. 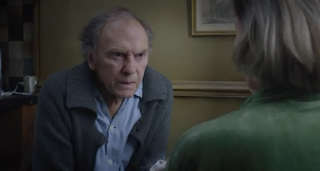 Amour is a compelling film about the emotional problems that an elderly couple face when the wife's health quickly deteriorates.

It is always a little strange when one co-star of a film that depends heavily on both leads is almost entirely forgotten not only by the academy but almost every other awards body. Despite his film being nominated for best picture, and his co-star Emmanuel Riva being nominated for Best Actress Trintignant was close to being entirely forgotten during awards season despite the fact that he actually has much more screen time than Riva, and a large part of the film is Georges's reaction to dealing with his wife Anne slowly dying from her ailments.

In the scheme of things there have been many performances this year trying for different results from the efforts of Daniel Day-Lewis's recreation of a historical icon to Joaquin Phoenix's unique no holds barred performance as a troubled veteran, to Jean Louis Trintignant. Where Day-Lewis was trying to give life to history, and Phoenix was trying something entirely off the wall Trintignant tries to be just a normal man as Georges in this film. There is not anything special, so to speak, about George. He is just a normal elderly man in a normal relationship with his wife.

Out of all the performances said to be great this year in a way Trintignant is probably giving the simplest, but this does not mean the least challenging. Amour is a film with words certainly, but just as important as the words are the silences which depend a great deal on the actors. Trintignant takes the right approach as Georges which is not try and be anything more than just a normal man in this situation as many men at his age would be. Amour after all is really not trying to be this very specific relationship between these two people, but rather it is more universal depiction of two people who believe very much in the wedding vow of in sickness and in health.

Trintignant and Riva really could not be more low key together as their words of love, despite being the title of the film, are commonly espoused. In fact the closest it probably comes to doing this is when Georges tells Anne that she looked beautiful. This is not to say the love is not stated quite clearly for us to see, it is and that is where the beauty of the performances comes from. Trintignant and Riva such a natural incredible underlying chemistry here. It isn't something that pops off the screen exactly, but the way they interact, and talk to one another suggests so perfectly that these two have been together for a great long while.

This is not something where the love is espoused loudly in a way, but instead so quietly. Riva and Trintignant therefore are quite put to task so to speak to honestly make these two to be entirely believed as a loving couple for decades. They absolutely do, and the most amazing part of it is the effortlessness that comes from both of their performances. They simply are Georges, and Anne the married husband and wife in their eighties who are still very much in love. It is astonishing how well they are able to do this, to the point that they don't seem to even need to establish it, it simply is there which is exactly how it should be between the two characters in the film.

With the two establishing so well the relationship between the two it allows for the proper emotional state to ensue when Anne begins taking a turn for the worse. Trintignant very much internalizes most of the feelings of Georges while dealing with Anne's health as he never really on really big emotions with his performance. He is quite powerful though by doing it this way, and in a way showing the way the decay on Anne really bares down on him. The film does not show her deterioration as something that is quick, but a slow process. Both actors reflect this Riva physically, and Trintignant emotionally.

Trintignant goes entirely for realism with this performance, an uncompromising realism that is quite striking. Triningnant shows very much the long haul of grief here as Georges. For him it is not something that comes and goes as his wife is not dead she is dying, it something he has to live with and Triningnant powerfully reflects as a fact with his performance. He shows us the anguish, the sorrow, the dread, even the anger of Georges as he must deal with, but importantly he shows the restraint in the man. This is the man dealing with these things over time, not a moment, it is not something he can escape from it is always there.

Triningnant plays this role with not a hint of flamboyance and stays intensely subtle in his portrayal through the film. He goes to the point that there character arc that there is in Georges is about as unassuming as possible really with this man's journey. Georges mostly stays very much in place just handling what comes to a certain point where he finally does something else other than just trying to keep his wife alive, or watching others trying to do the same. When he does this it does not feel like something out of the blue, but honestly something that has been building to through this.

The pivotal moment comes in and shows the greatness of this performance by Jean Louis Trinignant. This performance is entirely about genuine emotions. When Georges commits this act it seems one of honest love for his wife, and he absolutely earns the moment by playing it so quietly yet resounding in the heart he puts in the moment. He does this for his entire performance, and it is a special performance by Trinignant. It works so beautifully with his co-star and the two could not be more in tune with one another.

This is a performance is more about what he does not say than what he does say. He never breaks the understated nature of his role, and stays true to his character. It is a powerful work that brings out the complex emotions of this man in an always believable compelling fashion. Triningnant simply becomes this man, and brings to life this man's situation to life in such a vivid fashion it is incredible. There is not a single false moment, there never is an ounce of acting to notice in this performance. It is a great performance that brings to life the central idea of this certain sort of love in such an uncompromising unique fashion with a resonance that is absolutely tremendous.

Truly, Trintignant was worthy of a nomination--and if he were in contention, I'd be happy with him winning. It really is a lovely performance.

I think he might be the greatest french actor ahead of Jean Dujardin and Jean Marais, he was great in Z and A Man and A Woman.

Agreed whole heartily. While I prefer Riva, his is just as good, and more important to the film. I have no idea how he was completely left out in the cold this season, it's incredibly unfortunate.

Believe it or not, my favorite of the cast was Isabelle Huppert. I completely recognized the position she was in watching a parent (well, granparrent in my case) waste away so horrifically. That being said, Trintignant was terrific. I'm not sure if I *quite* see the big deal with Riva, but she's worthy enough considering what a weak year for leading ladies it was.

Best performance of the year, easily. He's the heart and soul of the film (sorry, Emmanuelle :/ ). He's so heartbreaking, one of my absolute favorite actors. It's now the second time that he gave the best performance and his co-star got the nomination (even though both Aimee and especially Riva are immensely deserving). Sad. :(

Yes. He should have been nominated. Very subtle nuanced performance. Just right.

Looking at 69 it seems very likely.