Jack Black did not receive an Oscar nomination, despite being nominated for a golden globe, for portraying Bernie Tiede in Bernie. 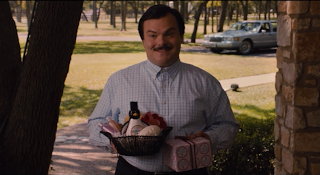 Bernie is a enjoyable dark comedy about a small Texas town's "nicest" man who befriends the town meanest woman and eventually murders her.

Jack Black as a an actor, being comedian, usually gives the same time of performance that is rather over the top, and usually to some degree excessive. That's why its quite interesting to him in this role as Bernie Tiede a friendly mortician who is the type of guy who seems to be on good terms with just everybody in town. Jack Black gives an extremely restrained performance here, and where many of his other films he plays basically the same character in a Woody Allen type of way. In this film he goes about making very unique characterization as Bernie Tiede. From the beginning of the film it is clearly a very different by Jack Black.

Black takes on Bernie with the utmost conviction, and sets about being Bernie from his first scene to his last. Black does an interesting thing here which is he gives both a flamboyant performance in one respect, but as well gives a very realistic performance as Tiede. With his very specific high pitched pleasant accent, and his modest manner of walking and standing he makes a very particular sort of man. Black makes Bernie perhaps a man you see often but you do not know personally. He makes Bernie a genuinely pleasant sort, unassuming in his pleasantness, energetic yet never seems to be forcing himself on you with his enthusiasm.

What works about this performance so much is how fully he goes about as Bernie everything that he does is fully in the Bernie fashion, which is with this almost strange grace and pleasantness that is almost always persistent. Black is great the way he pierces right through with this characterization always staying true to it, and never breaking it when it would be possible for some sort of cheap laugh. In a way, which is interesting for Black, and rather strange that he is Bernie, is the straight man. Where the Greek chorus of town's people will humorously comment on a situation Black always has Bernie being Bernie no matter what the situation may be.

Black makes Bernie very much a man you would see often but you do not know him completely and Black is excellent the way he creates and keeps the mystery of Bernie. Black lets us meet Bernie but just like the community come to very much like him, but he the truth of this man is kept as quite a secret. Such things as whether or not he is gay, and why exactly he spends so much time with the rich widow Mrs. Nugent (Shirley MacLaine) are given suggested answers by Black, but it would be wrong to give definitive answers. As he makes Bernie very much a man who always stays as the self contained Bernie should be.

The core of his performance though comes down to his portrayal of Bernie's relationship with Nugent which ends with her death. At first Black portrays it as Bernie being friendly with her as he would just about anyone. Time goes on and it becomes something deeper. Bernie stays consistently friendly yet Black is excellent as he slowly builds an apparent bitterness in Bernie. He keeps this all incredibly subtle yet he slowly and properly builds to the point when Bernie finally murders her. What is particularly effective of ti all is that Bernie still tries to keep a happy face right up until the murder, and even after it.

Black is very good in the murder scene as his delivery and expression suggests that of almost that of an impulse especially evidenced by his immediate breakdown. Black's portrayal of the scene is the only way it would really fit Bernie. He does not change Bernie after this event, and the way the murder takes place supports this lack of change. Black shows that Bernie basically just lost himself so to speak, so much so that he came to murder her. It is really a perfectly handled scene by Black, and absolutely succeeds in showing how a man who seems as pleasant as Bernie does could go about and murder someone so suddenly.

After the pivotal scene Black is excellent in portraying Bernie trying his very best to go on his merry way, but handles the guilt that lies within him well. When Bernie is finally caught and is faced with his crimes Black is very moving particularly in his scene where Bernie confesses revealing his pain and anger toward Mrs. Nugent very effectively. Importantly again though Black has Bernie attempt to stay his way which he does for the most part, even when being grilled in court which Black handles with the utmost delicacy showing Bernie go very closely to breaking but still able to keep it together. Black makes this character entirely believable. He is both the nicest man in town and the murderer. He is able to be funny while being an entirely serious portrayal of the man. This is very strong work from Black, and hopefully like Matthew McConaughey, it is only an indication of things to come from the actor.

Sounds like an interesting performance. I really loved him in School of Rock, but after that he's really been terrible.
What did you think of Shirley MacLaine?

Your last comment strikes me as rather too hopeful. I see McConaughey making a concerted effort to at least partially leave behind that old screen appearance pattern he had with the terrible rom-coms, what with his multiple notable dramatic appearances in somewhat off-the-radar films this year and his appearance in Mud, but I just don't see Jack Black making an attempt to do that as we speak and I don't really see that happening in the future, either, which is unfortunate.

Anonymous: MacLaine was quite good, and it is surprising she was not nominated for the Independent Spirit Award.

Michael: Oh I know I'm probably being too hopeful, but I do indeed hope he takes on another challenge like this in the future.

That's not to say I'm not hoping this marks a new beginning of sorts for him. He actually is quite talented.

I've always liked Jack Black (School of Rock), but I just did not warm up to this film. His performance was very good (MacLaine was a little blah), but not quite worth a nomination imo.

I completely agree! He was really great (just like MacLaine and McConaughey) and I wasn't expecting such a deep performance from him. Though I think he can be (or is) a good actor, which he proved in many of his previous films. In fact, I've never seen him being really bad...