Alternate Best Actor 1951: Kirk Douglas in Ace in the Hole

Kirk Douglas did not receive an Oscar nomination for portraying Chuck Tatum in Ace in the Hole. 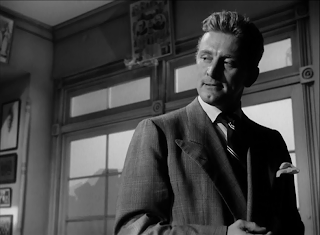 Ace in the Hole is a brilliant film about a former big time journalist who tries to make it big again by exploiting a man who has found himself stuck in a cave.

Kirk Douglas is a great actor and delivered not one but two performances worth mentioning in 1951. He was probably closer to being Oscar nominated for his performance in Detective Story as a hardworking but perhaps over zealous detective who goes off the deep end. He portrays the part very well, and even manages to sell the somewhat melodramatic breakdown his character suffers at the end of the film. His even more remarkable performance though comes in Ace in a Hole as Chuck Tatum a news paper man who is rather unscrupulous in his efforts to get a big story.

Douglas early on the film knows how to make Chuck a reporter with a lot of intense ambition in him that probably does not have too many positive aspects to it. Douglas from the start shows Chuck to be a restless man, and clearly some sort of axe to grin and it is clear from the start he will not have too many scrupulous feelings when it comes to desire to make it big again. It would be easy for Chuck Tatum to be just far too unlikable in the way he seems to be so uncomfortable in fairly reasonable surroundings, but Douglas just has so much charisma and energy in the part that he pretty much overrides the inherit problems within Chuck's personality.

Chuck finds his story of a man named Leo who has accidentally gotten stuck in a cave. Chuck seizes this opportunity to its fullest making a literal circus of the tragic event in every way possible and along with Leo's wife tries to take every single profit he can possible take from Leo's poor predicament. Chuck even goes so far as to bribe the local sheriff, and force the rescue effort to take a slow approach to saving Leo to make it so the story lasts even longer. Douglas takes on this immorality with a big smile on his face, and absolutely sells this idea of his careless drive in Chuck that makes him think of only his own profit despite a man's life being in danger.

Douglas is perfectly unabashed in his delivery of Chuck's ambition, and he knows exactly how to do it that he throws himself so much into this that he even brings the audience along in his tireless escapade. Douglas makes just how far Chuck goes believable so far that he even forces Leo's flirtatious wife to play the part of the caring spouse. Douglas just has the right forceful intensity, and joy that shows just how much Chuck loves to build the story up that sets the course of going too far. Importantly Kirk Douglas in the scenes where Chuck talks to Leo has subtle moments of morality which Douglas brings to his performance to just the right degree to build to the conclusion of his performance properly.

Near the end of the film when appears Leo may die due to Chuck forcing the delayed rescue Chuck has a moral revelation. Douglas is quite powerful as Chuck quickly breaks down at seeing just what he has created, and sees how low he has fallen. He loses the joy but the intensity stays now in a hatred. A hatred not only of those others who have profited from it like Leo's wife, but as well a hatred of himself due to his behavior. He absolutely delivers in these pivotal scenes showing just how much Leo's fate really does weight on Chuck by the end. It would have been easy to make Chuck to sanctimonious here, or seem out of character. Douglas finds just the right way to play this end to Chuck by never forgetting the self loathing as well as brilliantly building to this point through his subtle moments beforehand. This a strong slick performance by Douglas which knows exactly how to bring the most out of Billy Wilder's script.

I never understood why Douglas only got 3 nominations in his entire career, I dont understand that at all, ud think hed have about 7 or 8 and have at least won 1 lol anyway I mentioned DS because ive never seen Ace but I may have to now.

Its the same with James Mason 2, how he got 3 nominations only is silly, and ive seen Pandora and The Flying Dutchman thats why I said that before, ive never seen Rommel although, its Mason so itll probably be good lol.

Off topic, but are you doing a year from the 40's after doing both categories in '51?

Yes I intend to.

um random question time, whats your favorite disney movie =D, mines is Beauty and the Beast
( the original 1946 is a must see its amazing)

The Adventures of Mr. Toad and Ichabod Crane. Not really for the Mr. Toad half, but I absolutely love the Ichabod half.

also have u ever seen any of the live um real time versions if you get what I mean like Hunchback Of Notre Dame, Peter Pan and Beast.

My favorite Disney movie is Beauty and the Beast. I was taken aback at how well it aged when I rewatched it. The fact that it outright spits in the face of the traditional Disney tropes is somewhat strange in hindsight. Beautiful songs, excellent animation, and possibly the best casting of voice actors in a Disney movie (casting Broadway vets instead of then-popular celebrities). Hell, I don't even buy the battered woman/Stolkholm syndrome arguments some have made about it. I'm not a musical fan, but this one I have a major soft spot for.

you should see the original too Koook =D, really gothic and atmospheric.

RatedRStar: I saw the 1939 Hunchback a ridiculously long time ago. I also saw one with Anthony Hopkins as Quasimodo and Derek Jacobi as Frollo. That's it for really direct ones I suppose although I have seen films like Hook, Hamlet, Oliver!, and others though.