Alternate Best Actor 1951: James Mason in The Desert Fox: The Story of Rommel

James Mason did not receive an Oscar nomination for portraying Field Marshall Erwin Rommel in The Desert Fox: The Story of Rommel. 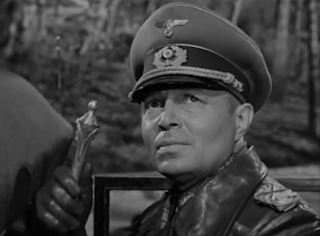 The Desert Fox: The Story of Rommel is a film with strong moment thanks mostly due to a certain performance in the film, but it probably would have benefited from a more personal approach to the subject matter at times as well as a more convincing actor in the role of Adolf Hitler.

James Mason gave another performance this year in Pandora and the Flying Dutchman as a man cursed to live forever. In that film Mason was quite good at being charming while still being haunting as well in the role. Just like Kirk Douglas Mason did not settle with one good performance, but as well appeared in this film as Nazi strategist Erwin Rommel. Mason does not do a German accent, no one does in this film which was the style at the time, and it hardly matters much to his performance. This obviously is not a one hundred percent accurate depiction of Rommel in any way, but that does not stop Mason from making Rommel a compelling character.

Although Mason doesn't do an accent he does adjust his presence that is fitting to Rommel. Where in many films Mason is able to be both informal, and formal at the same time he is very strict in his style. He makes Rommel a firm man accentuating this through his up right posture, and straight forward demeanor. Mason is really very different here as Rommel, but he still has that same strong presence although properly reworked to show the man's roots as a true soldier. Mason portrays Rommel as above all else a very firm man, who you would know is a soldier even when he is not in uniform. He makes Rommel the career soldier this man should be.

Early in the film Rommel is very much the loyal officer as he openly defends Hitler's military choices. Mason does this quite well in an entirely direct fashion. Mason makes Rommel first and foremost a man who must follow his orders. Mason handles this well by up front about it and showing it is something just right within his training as a professional soldier. Mason succeeds in pressing this professionalism in every aspect whether it is following an order by Hitler, or setting out his own strategy to fight. Mason makes Rommel an efficient man, and believable as the sort of adversary that would not only be feared by the Allies but would even respect him to a certain degree.

The process of most of the film is that Rommel slowly realizes that Hitler would rather all Germans die than ever surrender. Mason is excellent in this because he never rushes this aspect. Mason moves through the process well because he takes his time. He begins with his only questioning Hitler's insanity, and at first he is more of saddened by them than angry over them. Mason builds to a more hostile opposition well that he infuses properly with feelings of disbelief over the absurdity of the orders, as well as a great deal of sadness in seeing the way Hitler insists on going about the end of the war. Mason portrays this strongly by showing it as an honest collapse of the faith of a man who has always been loyal before.

Mason builds powerfully to the end of the film where Hitler decides that Rommel is a traitor and must either commit suicide or be killed. Mason is very moving in his last scenes as he brings out quietly the passionate determination in Rommel to refute these charges, and always supporitng that he loves his country. This film has quite a few short comings one being that Rommel deserved far more personal moments with a lesser actor than Mason this ending could have really fallen flat. Mason manages to bring the weight to the scene anyway, and great deal of poignancy which is a true testament to his talent as an actor. This role honestly does not do Mason a lot of favors, but he manages to give strong assured performance nevertheless.

can you do James Mason every single year haha lol, I dont no why, but I always gleefully smile at the chance of another Mason performance appearing on your blog when the nominee list is on =D.

Well Mason will certainly be included in many more years.

Hey, great actors are great actors. Though I would like to see some more under-the-radar performances/actors reviewed. Then again, I got my wish with Winstone in The Proposition, so I wont complain.

1951 Supporting is quite tricky to get an easy group of 5 nominees, so I basically got a list of them lol that you might want to consider.