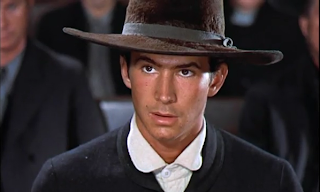 Friendly Persuasion tells of a peaceful Quacker family who attempt to hold onto their values as the Civil War moves toward them.

Anthony Perkins is an interesting an enjoyable case of an actor who became famous for a certain role that held stark contrast to their previous work. Even though their most famous role was against type they their role seems to make them that type. I was able to enjoy something similar during the last year I did where I got to watch Since You Went Away with Robert Walker as an unimposing squeaky voiced soldier which stands in a rather enjoyable contrast to his performance as the psychopathic stranger in Strangers of the Train. The same is true here as Perkins portrays an unassuming kind Quaker which is a very different performance from his most famous role as Norman Bates in Psycho.

Part of the reason his performance as Norman Bates probably worked so well though was because of Perkins's ability to portray an entirely descent but somewhat shy person like the character of Josh Birdwell in this film. Josh Birdwell the older son of a Quaker family, he is a good Quaker who always tries to remain faithful to the ideals of his faith and obey his mother and father. Friendly Persuasion has a little bit of trouble like other films that try a specific antiquated style of speaking that is not Shakespearean. Usually when a film tries this it shows why actors specifically study to speak the Shakespearean language convincingly, when the actor is unfamiliar with the language style or meaning their performance can sound needlessly stilted and it sounds like they spend most of their effort just being able to remember the words without properly bringing meaning to them.

This is not as much of a problem as it could be as Friendly Persuasion only lays on the Quaker dialect heavily at first, and to Anthony Perkins' credit he is the actor who most convincingly speaks the words actually, and he does not have the same problems as some of his co-stars have ridding his performance from any unneeded distractions which riddle a few of the other performances in the film. Perkins gives a good performance early on and realistically portrays his somewhat shy and gentle Josh. He does not make a huge impact early on and nor should he is suppose to be a wholly good son. Perkins realizes this well and honestly portrays the part without being dull. He still turns Josh into a character of his own that does have his own feelings, and emotions.

Perkins offers nice support early on and does his best to help create real family element to the film with his nice warm portrayal of the son who at first tries to be a quiet modest pacifist. I have to admit Perkins does not have the rest of the cast to really support his efforts to make a memorable family portrait in the film, but Perkins most certainly does his best to do his part. His performance does not remain in the role of the good son the whole time though as Josh is faced, just as the rest of the family is with the pressing issue of the civil war as their livelihood will soon be threatened by Rebel troops. Josh is the one who actually is most troubled by the issue and his conscience over whether or not to fight and kill to protect his family and friends.

Perkins' portrayal of Josh's struggle with his conscience is the best part of his performance. Early on Perkins gives some small subtle indications of just the realistic uncertainty in Josh's mind over what he will or won't do. Later on when he finally does decide to fight Perkins gives a moving portrait of Josh's still very quiet but painful choice to fight what he does believe is right. Perkins is effective here because he conveys that it is not a simple decision for Josh and Perkins shows all of the conflicting and troubling emotions within Josh. Perkins brings us right into Josh's fears as he finally does fight, and the terrible guilt after the fight is over. Through his performance Perkins realizes the central theme of the film very well. My only wish was his character was devoted more time as he always came off as the most realistic and most interesting of the cast, and he deserved more time at the end of the film than he is given. Nevertheless this is a fine performance Perkins that succeeds in realizing his character's struggle in a honest unassuming fashion.

I love Perkins in everything Ive seen him in.

Have you seen him in anything else other than this and Psycho Louis? because I really admire those two performances.

I have seen him a few others The Actress, and Murder on the Orient Express both which he was okay in.

Did you like the film?? because I was partially mixed on the film.