Jack Palance won his Oscar from his third and final nomination for portraying Curly Washburn in City Slickers. 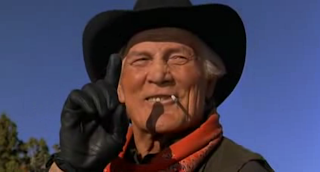 City Slickers is a comedy about a literal group of city slickers who go on a cattle drive.

Jack Palance portrays the trail boss Curly who heads the cattle drive. He is rough tough, and with a glint of a philosophical side as well, an all around old fashioned cowboy. Jack Palance plays him rough and tough well enough most certainly with the strong screen presence he usually was able to bring in his better performances. Also he does have an occasional enjoyable reaction or two as well when he sees the city slickers act stupidly.

Palance as well handles the philosophical side of Curly with an ease and grace that is entirely appropriate for his old dying race demeanor and fits the rest of his character. My problem with this Oscar winning performance though comes from his screentime, and the amount asked of Palance from his performance. This just is not too much of a challenge really in the end especially compared to say his performance in Sudden Fear, or even his performance in Shane.

Firstly he is only required to do exactly what he does no more, which in the end is surprisingly little. Secondly though I was surprised with just how little that was total, I had seen the film before but not in a long while, and I forgot just how little Palance was actually in the film. This still is not a bad performance by any means, but it just never amounts to anywhere near one would expect from what was named the best supporting performance of the year.

91 is the weakest year ever for me but i can see how he won,the competition was zero and he was a legend there were good supp perfs that year just none were nominated by the academy bar lerner and jones to an extent,bad bad bad 1991.

My least favorite "Best Supporting Actor" ever, my personal vote goes to Joned